Octavia is an agent who tends to sometimes muddle things. Her partner is Oz, one of the hundred-some agents in Precinct 13579 who is invisible. Her badge number is 71, and she participated in the O Games. She is known for her shadow puppets.

Octavia was one of the five agents chosen to compete in The O Games. Her athlete's quote was "100% bright, 0% boring". She was eliminated in the first round by Odd Todd during the Blob Toss event because Odd Todd scored for everyone except her. This led Oscar to update the rules list to prevent any players from scoring for other players going forward.

"Have you seen my partner? He's supposed to meet me for lunch." 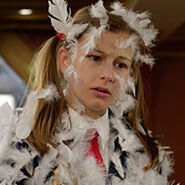