Auburn hair in a ponytail, red glasses (black on one occasion), brown eyes

For the assistant/Investigation agent of the same name, see Other Olympia (Person).

Agent Olympia is one of the main characters in Season 2 of Odd Squad alongside her partner Otis. She is played by actress Anna Cathcart.

Olympia is an 11-year-old recent grad from Odd Squad Academy. Smart, perky, and easily excitable, but never annoying, She is a fangirl who is passionate about Odd Squad and loves to come to work each day. Open and friendly, she'll tell you her life story as soon as you meet her, whether you want to hear it or not. Olympia is a die-hard optimist and believes in everyone and everything. She loves Odd Squad history and is a huge fan of agents Olive and Otto.

Olympia is very energetic and friendly. She loves working, but she also enjoys having fun and usually has an optimistic outlook on life. She loves to help others and whenever she sees that someone is upset, she does her best to cheer them up. She has the habit of acting like a workaholic -- she treats her job seriously and with dignity, but also has an obsession with it. She is also very organized and is somewhat disgusted by disorganization.

Otis is Olympia's partner and best friend. When Olympia first meets Otis in "First Day", Otis is shy towards her, which causes Olympia to think he doesn't like her. In the middle of the episode, Otis tells Olympia he wants her to be his partner and that "I've said more words to you than anyone in my life". Over the course of the season, Otis gets over his shyness and is bolder and more confident around Olympia and others, but still feels awkward and somewhat embarrassed of Olympia's antics.

In "Good Egg Bad Egg", Olympia refers to Otis as "a flip-flopper", meaning he never has one solid opinion and is always changing his mind about things. In Otis' defense, Otis says Olympia always has to have the last word; Olympia disagrees directly after Otis states such. After apologizing, they start fighting about who is luckier to have each other as a partner.

In "Rookie Night" when Otis and Olympia are tracking down the other agents celebrating Rookie Night, they eventually miss it and Olympia says it is Otis' fault she had the best Rookie Night ever going through all of the hallway doors in Headquarters together with him.

In the Season 2 finale "Odds and Ends", when Otis asks to have a private talk with her, at the end of their talk, Olympia tells Otis that the best part about working at Odd Squad is that she gets to work with her best friend while Otis tells Olympia the same thing.

Oona is Olympia's co-worker and close friend. Their personalities are somewhat alike while Olympia is much more optimistic. In "The Ninja Situation" the two are seen singing together, and in "Ocean and the Fly", Olympia sings with Oona while she is in a fly's body. Oona is mostly seen with Olympia if Otis is there too; they serve as an effective trio in a lot of episodes, such as "Odd Squad: World Turned Odd".

Ms. O is Olympia's boss. Both are on friendly terms with each other. Oftentimes, it doesn't seem that way because of Ms. O's tough personality and seriousness, as seen in "O is For Opposite" (when Olympia is trying to take pictures of herself and Ms. O, but Ms. O tries her best to be hidden from the camera).

In "Odds and Ends" when Ms. O is all packed up to leave Precinct 13579 to work at The Big Office, after giving Oona and Otis a final word before she leaves, she tells Olympia that she taught her to always look on the bright side and the way she loved Odd Squad made her love it even more. She also tells Olympia that it's been the honor of her life to work with her.

Ocean is one of Olympia's co-workers. They are rarely seen together, except in "The Creature Whisperer", when they had to catch a loose Hopinbob together.

Olive is one of Olympia's idols alongside Otto. The two work together in "Odd Squad: The Movie", but barely get to know each other due to Olympia's excitement to work with her.

In the OddTube episode, "Interview with Olive", Olympia gets to know a little bit more about Olive. When Olympia asks Olive to give her some tips on how to be more like her, Olive tells Olympia that she shouldn't be like her and she should be herself. She also says she's seen Olympia in action and she is one of the best agents she's ever seen and that she has a bright future at Odd Squad. She also asks Olympia to believe in herself because Olive herself believes in her, which causes Olympia to explode with joy.

Otto is another one of Olympia's idols next to Olive. In "First Day" when Olympia asks Instructor O if she is going to be the "new Olive", Instructor O tells her that technically she is the new Otto, since Otis is more of an Olive than an Otto. However, Otto and Olympia are rarely seen together; Olympia is never close to Otto except in "Odd Squad: The Movie". She also greeted him via phone in "Interview with Olive".

Olympia knows a lot about Agent Orla and the Mobile Unit, albeit she does not work with them due to the fact that she is working at Precinct 13579, while Orla is working in the Mobile Unit van and traveling around the world.

In the first Season 2 episode of OddTube, "Welcome to OddTube Season Two!", Orla says that Olympia's kind words mean a lot to an agent who has done so many noble deeds. Hearing her say that, Olympia says that she loves the way Orla talks. Olympia also tells Orla to be herself and that she'll do a great job by doing that, passing on the words she received from Olive in "Interview with Olive". Orla tries her best to hide her excitement from Olympia, but after she hangs up, she explodes with joy. 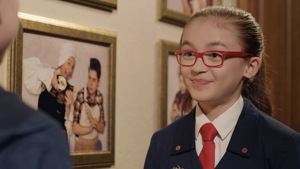 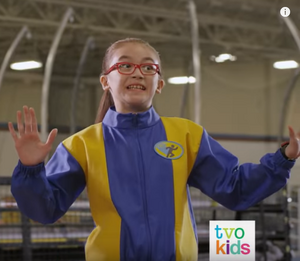