"Back to the Past"

Agent Oona is a scientist at Odd Squad. She is an expert on gadgets and tends to follow in Oscar's footsteps, both figuratively and literally. She is now the head of the Science Department in Precinct 13579. She has lots of friends, notably Olympia and Otis.

Oona can be a very comical but somewhat socially inept character. Oona is known for her hyperactive activity and her slight over-exaggerations. Despite all of this, Oona is still an extraordinary genius. She is able to build gadgets as well and as often as Oscar did.

Olive and Otto: Idols (sort of, not as much as they are for Olympia)

Her brown, straight hair down is in a half ponytail up do held by a small green hairtie (about a cup length). She is skinny; but short and her eye colour looks the same with her hair, but with lighter tanned skin. 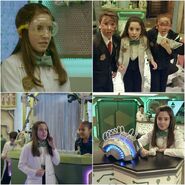 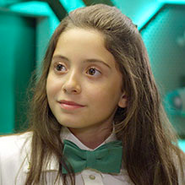