For the Investigation agent seen in Season 2's "A Job Well Undone", see Agent Opa. For the agent heard in the Odd Squadcast episode "Broadcast Three" with a similar name, see Oval.

Agent Opal is an agent at Odd Squad, and one of the main protagonists of Season 3.

She and her partner Agent Omar were agents stationed to the Odd Squad Headquarters in the Arctic, soon setting out once word is confirmed about a map leading to the discovery of the 44-Leaf Clover, an ancient Odd Squad artifact.

Once the Mobile Unit is formed, she often is the leader of the group on their missions, although this has never been officially recognized.

She is energetic, enthusiastic and always dreaming big. She loves to be a part of important and special tasks, and sometimes gets overly competitive. She likes to think of herself as the leader of the rest of the Mobile Unit. She states that If she could be any animal she would be a tiger, because she is fierce.

Agent Opal has a light brown complexion with darker brownish hair worn down with a half crowned look on her hair. Plus, her eyes are also brown in color as well along with her skin complexion and hair.

The Shadow is an enemy of the Mobile Unit and her hatred is often directed towards Opal. Opal has a mysterious relationship with The Shadow which has not been revealed yet. At the end of Odd Beginnings: Part 2, The Shadow states that Opal "made her who she is".

In "Follow the Leader", she exposes The Shadow's true identity as Olizabeth, Opal's younger sister.

"End of the Road" reveals that The Shadow and Opal attended the Odd Squad Academy together, but while Opal went on to become an Investigation agent, The Shadow decided to become a villain due to Opal being too overprotective of her, stating that she wanted to be as good as her at something and realized that villainy was the best way to achieve such a goal. The agent eventually manages to convince her that she can do anything she wants and be as skilled as her older sister at it, and the pair make up, working together to return the villains' powers back to the cube once it forms into a destructive purple tornado. Opal then decides to leave the Mobile Unit to stay behind with Olizabeth and fix the damage she caused in Australia and in other countries. 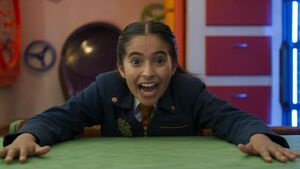 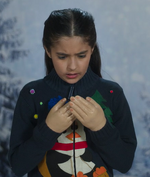