"Blob on the Job"

Agent Oren is an agent at Odd Squad Precinct 13579. His partner is Agent Olaf. He is one of the supporting characters.

Snarky and arrogant, Oren and his partner have an ongoing rivalry with Olive and Otto. Unlike their industrious rivals, Oren likes to weasel his way out of work whenever possible. Oren likes to brag and considers himself Odd Squad's best agent. He has a fear of pancakes, and dreams of becoming director of Odd Squad (as shown in "The Potato Ultimato").

Oren sometimes deliberately mispronounces Otto's name which offends him. For example, he called Otto "Ewtoo" in "Blob on the Job", "Risotto" in "Best Seats in the House", and "Ottawa" in "Switch Your Partner Round and Round".

Oren was one of the five agents chosen to compete in 'The O Games'. His athlete's quote was "100% happenin', 0% humble". He was eliminated in the second round by Odd Todd during the 25 Centigurp Dash event.

Looking at himself in mirror, dreaming about being Mr. O, and beating Olive and Otto at everything. 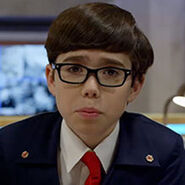