For the Orla seen in Season 2 who is an Agent-in-Training, go here.

Agent Orla is one of the main protagonists of Season 3 of Odd Squad. She is one of the eldest members of the Squad, being 500 years old.

She is a fierce, tough warrior and Odd Squad agent who is unfamiliar with the modern world. As such, she speaks in Shakespearean-style wording quite often. She has been known to rush through things such as directions, as demonstrated in "Portalandia".

Orla has light skin, messy black hair tied up into a funny fan chignon with a braid that's tucked out loosely on her right ear of her hair attached with a gold wire hair extension. She has brown eyes. 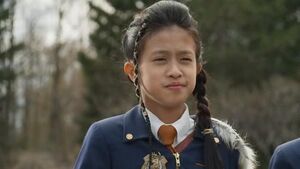