Orrzack is a background agent in Odd Squad. He has gotten both the Noisemaker disease and the Jinx.

On the day the Pienado was released in Headquarters, Orrzack and his partner were on cleaning duty. Upon what they thought was completion, they realized that, due to the pienado, their work was far from done.

After helping Ms. O save Shmumberman, Orrzack got to take over her office temporarily while she had adventures in the comic book. Unfortunately he can't quite figure out how to do all the jobs right. 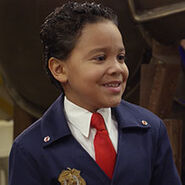