Agent Oswald is one of the main protagonists of Season 3 of Odd Squad. He is portrayed by Gavin MacIver-Wright.

He was a worker for the Odd Squad Library in New York, having left to join Agents Opal and Omar on their quest to find the 44-leaf clover.

Albeit lacking bravery and being very timid at times, he loves reading and solving cases with his fellow agents. If he could be any animal, he would be an eagle, because then he could fly away from any danger. His favorite gadget is the Rope-inator. 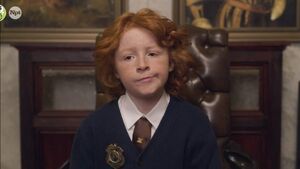