Agent Otis is one of the main characters in Season 2 of Odd Squad alongside his partner Agent Olympia. He is portrayed by Isaac Kragten.

Originally, Otis' background was a complete mystery, since there was no record of him attending the Academy. Eventually, it was revealed that he was raised by a family of evil ducks, often committing rude and selfish activities with them and communicating via a Duck-to-English voice box.

When the evil duck family plotted to move the Earth closer to the sun, allowing them to take over more ponds without migrating south for the winter, Otis grew skeptic of their actions and reported his duck family to Ms. O. Otis' former family felt betrayed, causing a fear of ducks that would plague Otis for years to come.

Out of gratitude and pity, Ms. O took it upon herself to personally train Otis to become an Odd Squad agent, even teaching him to walk instead of waddle and to say his name clearly. After Olive and Otto were promoted to Mr. and Ms. O for the Squad across town, Otis was teamed up with Academy graduate Agent Olympia to fill their places at Precinct 13579.

Serious, rough around the edges, fiercely loyal, agent of few words. Otis is a man of action, who recently transferred to Ms. O's squad. Unlike his partner, Olympia, Otis plays things close to the vest. Just because he doesn’t share his feelings, however, doesn’t mean he doesn’t care. There seems to be a lot beneath the surface with Otis and he is constantly surprising his partner with special skills and knowledge and interests, like his intense love of kittens and fear of ducks.

He is heroic, noble, kind, selfless, stoic, stubborn, brooding and usually serious in tone, but has had a fair number of funny moments. He exhibits dislikes others around him find strange, including an initial distaste for gum and a dislike of the ingredients of pizza. He has a fear of ducks, due to his betrayal of his former duck family.

Olympia is Otis' partner and best friend. When they first met in "First Day", Otis was originally shy towards her which causes Olympia to think that he doesn't like her. When Olympia decides to quit Otis says "This is worse than the duck" and tries his best to stop Olympia from quitting. In the middle of the episode, Otis tells Olympia he wants her to be his partner and that "I've said more words to you than anyone in my life". which cheers Olympia up a little. Over the course of the season, Otis gets over his shyness and is bolder and more confident around Olympia and others, but still feels awkward and somewhat embarrassed of Olympia's antics. The two have their own secret handshake as seen in "First Day" and it changes as in "Orchid's Almost Half Hour Talent Show". Olympia says it is a sign that they're perfect partners.

Otis tends to be upset when he isn't being the best partner he can be, but he is surprised to see Olympia still happy as seen in "Rookie Night" (When they are tracking down the other agents celebrating Rookie Night, they eventually miss it and Otis apologizes and says it is his fault for making them miss it. However, Olympia says it is Otis' fault she had the best Rookie Night ever going through all of the hallway doors in Headquarters together with him.) and also in "Happy Halfiversary" (When Otis is upset that he didn't get her a present for their Friday Felebration, Olympia is still happy because she thinks that Otis was giving her a Odd Squad manual still in its wrapping).

In the Season 2 finale "Odds and Ends", when Otis asks to have a private talk with her, at the end of their talk, Otis tells Olympia that the best part about working at Odd Squad is that he gets to work with his best friend, while Otis tells Olympia the same thing, confirming their friendship.

Oona is Otis' co-worker and good friend. The two are rarely seen together unless they are with Olympia; they serve as an effective trio most of the time.

Otis along with Olympia met Oona unexpectedly in "Back to the Past" hoping that Oscar would be at the Lab. Oona starts to chatter, Otis seemed weirded out. Not long after, Oscar introduces Oona to Otis and Olympia.

Through the course of the season, Otis and Oona become good friends. Otis begins to find Oona very predictable such as him expecting her to have some "bad news" when she calls him and Olympia or her dropping gadgets. Oona loves to help Otis if he's in need as seen in "Happy Halfiversary" she helps stall Olympia so Otis can find a present for her.

In "License to Science", Otis is Oona's mentor and helps her pass her lab director's test. While Otis is helping her she says "I think you got carried away".

Oona doesn't show as much empathy towards Otis than all the other agents in the events of "Who Is Agent Otis?" when Otis gets kicked off the squad. In the continuation of that same episode "Odds and Ends" while Olympia and her are trying to prove Otis' and Ms. O's innocence, Oona is bothered at Otis' times to call sick and thinks he called in sick because he wanted to celebrate St. Patrick's Day and Flag Day.

Ms. O is Otis' boss and close friend. She has known Otis long before she met his partner Olympia. In "Who Is Agent Otis?", it is revealed that Ms. O changed his name from "Quack" to Otis. Otis first met her having to call her precinct because his duck brothers would not listen to him when he tried to tell them that they were going to destroy the world. Otis and Ms. O form a plan to stop his brothers. Later, Ms. O tells Otis that her Squad could use an agent like him. This sparks the idea to make Otis an agent. Otis says that he'd never forget what Ms. O did with him, teaching him to be less duck-like.

He later discovers that she is extremely hard to work with as seen in "Odd Squad Needs You" and "Three's Company".

Orchid is a co-worker of Otis. She has shown to be very close friends with Otis although she enjoys taunting him in a playful way, Otis most of the time just silently ignores it. Orchid and Otis' first acquaintance is unseen in the series, In Otis' second appearance "Back to the Past", it appears that he has already met her. In their first encounter in the series, Orchid gives Otis a jar that sprays glitter when opened for an April Fools prank. Orchid exclaims, "Burrrrrrn!" at Otis and leaves skipping and singing "la-la-la-la".

In the b-plot of that same episode "Odd Squad Needs You", Orchid helps Otis film an Odd Squad commercial. Otis thanks Orchid, but Orchid thanks him and tells him that he gave him a front-row seat to this "Train-wreck".

In "Partner Problems", Otis is forced to help Orchid and Ohlm solve a case so they stay at the Squad. Otis finds the two extremely hard to work with and annoying. When Orchid and Ohlm decide to quit the Squad and go back to the Academy, Orchid says, "I am going to miss this old face" (referring to Otis' face). However, by the end of the episode, they end up staying at the Squad.

In "Odds and Ends", Orchid is upset when Otis gets kicked off the Squad along with Ms. O and takes it out on Olympia.

Otis and Todd's relationship is unknown. However, in "Mid-Day in the Garden of Good and Odd", Todd claims that he's seen Otis before, hinting at his villainous past. Otis denies it and tells Todd that "I just have one of those faces". Todd replies "So do I". 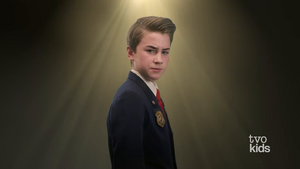