Blob on the Job

Blob on the Job is the A-Plot of the 6th episode of Odd Squad.

When a blob gets loose in Odd Squad headquarters, Olive and Otto compete against Oren and Olaf to catch it first.

Note: This description uses "gallons" and "quarts" and "cups" but in the Canadian (TVOKids) version it uses 'liters.

The episode begins with a woman whose house is making noises like a car engine and horn. Otto uses a gadget and fixes the sounds. However, after the agents leave, the house starts flying into the air on rockets.

When the agents enter headquarters, they see Oren and Olaf, announcing that Olive and Ewtoo (not misspelling, he pronounced it this way) have just failed yet another case. Otto corrects Oren for mispronouncing his name and Olive says that they solved a case. Oren says that they solved a gazillion cases just that morning. Olive protests that this isn't a real number, but Oren says that it is if Olaf says it is. Olaf says it is. Suddenly, the lights begin flashing code ruby. The agents run out of the tube lobby, where Ms. O orders someone to shut off the red lights.

Ms. O tells the agents that the blob has escaped. Oscar arrives and mentions that he had written about the blob in his newsletter. Oscar had been in his lab, cleaning vials of... something... when the blob had broken out of its jar. Ms. O says that one gallon of the blob is loose, and Otto what a gallon is and says he thought they only measure things in inches and feet. Oscar explains, but Ms. O interrupts them and reminds them that the blob is loose. After Oren and Olaf argue with Olive and Otto, each team declares that they will find the blob first. They each go off to try to catch it.

They go to the Mathroom, where they determine that both teams have one quart. Ms. O realizes that there are still two quarts left. They continue to search for the blob while Ms. O dances in the Mathroom. Olive and Otto eventually find the blob in the ceiling. It squirts Otto's hair when he looks at it, and it escapes under the door. Oren and Olaf see it and fight for it, each getting part. Ms. O rings a gong and yells for everyone to go to the Mathroom.

They each end up with two cups. Olaf explains that there is still one quart left, and when he uses a full sentence with several four-syllable words, everyone is astonished. They leave and keep searching for the blob. No matter how much they search for the blob, they are unable to find it. Otto says that they've been searching for hours and he is tired of getting slimed. Because Otto mentioned it, Olive eventually declares (pointing at Otto's suit) that it was right there. Otto says that they just have to look inside their hearts. Olive says that no, it's on his suit. Olive and Otto scrape it off and get one gallon. Oren begins clapping. While they watch him clap, however, Olaf actually steals the blob.

Ms. O rewards Oren and Olaf by sending them on a month-long blob-counting trip to Blobsylvania because they know so much about blobs. After they leave, Ms. O congratulates Olive and Otto, but Otto asks why Oren and Olaf got to go to Blobsylvania. She explains that Blobsylvania is terrible. The episode ends with Olive and Otto watching Oren and Olaf trying to count hundreds of blobs while the latters are getting slimed, and according to Olive, there are at least a gazillion. Oren and Olaf miscount the blobs at 556 and they are forced to start all over again and Olaf says "Yay!" and Oren tells him to stop saying that. 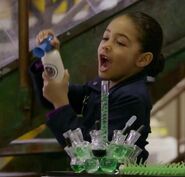 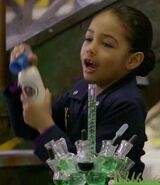