"Put Me In Coach"

Coach O is, as his name suggests, the coach at Odd Squad. He loves any and all sports, including underwater badminton and donkeyball (which he invented). His memory is spotty. He also does world-famous voice impressions, as revealed in Orchid's Almost Half Hour Talent Show.

His department is Athletics and Conflict Resolution.

He is portrayed by child actor Deandray Hamilton.

Coach is wearing a jersey 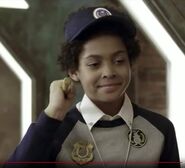