Delivery Douglas "Doug" is Delivery Debbie's ex-rival, owner of Delivery Doug's Egg Salad Sandwiches, and co-founder of Doug and Debbie's Egg-Salad Pizzeria. On the contrary to Debbie's restaurant, Doug used to run his business in his mother's basement and uses his Eggmobile to get around. He now lives and operates his business in the Arctic, where he has two locations.

In "Who Let the Doug Out?" he reveals his egg-salad sandwich recipe is: 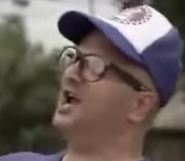