For the Season 3 episode with a similar name, please see Double O Trouble.

Double Trouble is the B-plot of the 2nd episode of Odd Squad.

Debbie from Debbie's Pizzeria has doubled...not once, but twice, creating four Debbies! When one of the four Debbies goes missing, Olive and Otto need to find her.

The episode begins with Olive and Otto in a donut shop. The owner of the shop explains that he makes donuts every day, but he cannot do it as a disembodied head. Olive suggests using the Bodyputbackinator, but Otto thinks the Returnbodyinator might work. Olive doubts this, so he suggests they rock-paper-scissors for it. Olive agrees to a best-of-five contest, but the shop owner insists he has donuts to make and suggests they zap him with both. They do so, and his body returns. The shop owner thanks the partners, and they wish him a good day. As he waves goodbye, he realizes that his hand is now a foot.

Back at Headquarters, Olive and Otto enter Ms. O's office. She tells them that something very odd has happened and introduces Debbie, from Debbie's Pizza Delivery. The agents know this business well, especially the advertising jingle, which they perform right there in the office. Once they are finished, Olive asks Debbie what the problem is. Debbie explains that her pizzeria was really busy.

In a flashback, Debbie is overloaded with phone calls as she tries to make pizza. Suddenly, a duplicate of Debbie appears beside her, and both Debbies scream. Two more Debbies appear, and all four start screaming.

In the present, Debbie finishes her story with coming to Odd Squad. Olive instantly concludes that Debbie has a case of the Doubles. When Debbie asks what that is, Olive explains that sometimes, when you wish there could be two of you, another you is actually created. Otto points out that there are four Debbies now, and Ms. O says this is because it happened twice. Accessing a report by Agent Orson to demonstrate, she explains that doubling means adding a number to itself. Olive continues that the issue began with a single Debbie. One plus one is two, and two plus two is four. Ms. O announces really bad news.

At the lab, she reveals that one Double is missing! Oscar steps up and announces really, really bad news: his watch stopped working, and he can't fix the Doubles unless every Debbie is there. Ms. O orders Olive to go search for the Double with the original Debbie. When Debbie asks how, Olive hypothesizes that the Double should think and act like her and asks what she would normally be doing. Debbie answers that on Wednesday at lunchtime, she always delivers a pizza to 2 Rosewood Avenue, and she and Olive head off. Otto starts after them, but Ms. O asks him to stay behind and "keep the other two Doubles out of trouble". He jokingly challenges her to say that ten times fast, and she does it with ease at an almost insane speed. "She is one impressive lady," remarks Oscar to a stunned Otto.

At 2 Rosewood Avenue, the lady there reports that she hasn't seen the Double or her pizza. Debbie apologizes and offers to get one for her right away, but she says she'll order from another place. As she goes inside, Debbie and Olive head down the stairs. Debbie is bemoaning the situation when an angry man runs up and orders Olive to arrest her. Olive replies that that isn't really Odd Squad's line and asks him to explain what happened. The man explains that he was at home in 4 Rosewood Avenue when Debbie tried to make him buy two pizzas that he never ordered. Debbie insists it was her Double, and Olive asks why he paid for the pizzas if he didn't order them. The man insists accusingly that he's asking the questions, as in how to get rid of his stomachache from eating both pizzas. When Debbie expresses surprise about this, the man snaps at her again and declares that he will refuse to order from her again. Debbie groans that the Double is ruining her business, and Olive suggests catching her at the pizzeria.

Back at Headquarters, Otto walks into Ms. O's office and asks to talk to her. Ms. O replies that it better be good. Otto sits down and starts talking about how much he thoroughly enjoys working at Odd Squad, but Ms. O can tell there's a "but" coming. Otto then asks her why his partner gets to do cool things while he is stuck doing terrible and boring things like babysitting Doubles. Ms. O starts telling Otto a story about a baby bird whose attempt to leave the nest ended disastrously. Otto wants to know if the baby bird in the story represents him, but Ms. O replies that she just wanted to tell a story before ordering Otto back to work. As Otto hurries out, Ms. O sighs that she's getting too young for this.

Meanwhile, Olive and Debbie are approaching the pizza place when they run into Debbie's rival Delivery Doug. Doug teases Debbie about failing to deliver her pizzas properly. Debbie informs Doug that she and Olive are busy, and Doug replies that he's the busy one thanks to Debbie. When Olive asks if he also delivers pizza, he replies no, it's egg-salad sandwiches. After answering a phone call from someone with the wrong number, Doug explains that Debbie's customers will start ordering his food and he will make a lot of money (with which to buy a boat to take his family sailing). As Doug leaves, Debbie remarks that the Double must be found, and Olive agrees.

At Headquarters, Otto presents the two remaining Debbies with magazines and a snack plate, and excuses himself to get some work done. The Debbies look at each other and grin, and as Otto makes his way around Headquarters, he keeps running into the Doubles, who greet him with a "Hi-hi" each. Otto begs the Doubles to leave him be, as he has paperwork he has to do. The Doubles reveal that they enjoy doing paperwork, and Otto gets an idea, handing his stack of files to the Doubles.

At the pizzeria, Olive and Debbie unsuccessfully hunt for the Double. Suddenly, two people arrive and are very upset. Olive immediately knows what happened: one person ordered a pizza and never got it, and the other received an unordered pizza. Debbie collapses into a chair and claims her business is ruined when Olive receives a call on her badge-phone. On the other end is Otto, who reports that both his work and hers is finished as the Doubles clean his desk and sharpen his pencils. He claims the Doubles are great, but they did make two copies of everything. Olive asks to clarify, and Otto explains that the Doubles do everything doubly. Olive realizes that her partner is right, hangs up, and tells Debbie she thinks she knows where the Double could be. When Debbie asks how, Olive reiterates the definition of doubling and reports that the Double has been doubling the addresses of her pizza deliveries. This is proved correct when the dissatisfied customers are revealed to live at 5 and 10 Oak Street, respectively. (The man who actually got the pizza thinks it tasted great, and he has no idea why he's so upset.) Olive asks if any other orders were made, and Debbie answers that she needs to go to 10 Main Street that afternoon. Olive concludes that the Double must be headed for 20 Main Street. The two dash off.

At 20 Main Street, the Double, with two pizzas is greeted by the real Debbie and Olive. They bring her back to the lab, where Oscar affixes helmets to each Debbie and prepares to zap the Doubles back into Debbie. Before he presses the button, Otto requests a moment and shares a heartfelt parting message with each Double. When Ms. O tells him that's enough, Otto argues that the Doubles are amazing and don't deserve to be gotten rid of. Olive acknowledges Otto's point and says that Debbie started doubling because she had so many pizzas to work on all by herself and suggests Debbie train the Doubles to help her in the pizzeria.

The episode ends with a TV commercial featuring all four Debbies, plus Olive and Otto. 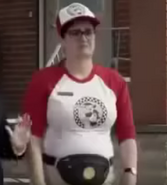