Fistful of Fruit Juice is the B-plot of the 22nd episode of Odd Squad.

Ms. O tells Olive and Otto the story of how she first joined up with Odd Squad.

The episode starts with Olive and Otto cleaning Odd Squad as it's Cleaning Day. After a few seconds, Olive says they have finished cleaning the Squad from top to bottom. They also have dusted, wiped, and scrubbed the shelves on the wall. Otto says he doesn't like Cleaning Day. Olive says it's fun and tells what is fun about it and then Olive happens to stumble on a picture of what the Odd Squad looked like back in the day. Just then, Ms. O joins in and says she knows that place well. Olive asks whether Ms. O worked there, she says "yes". Otto asks whether she worked for Odd Squad then. She says "no". They ask her to confirm to them that she didn't work at Odd Squad. Ms. O asks them if they want to do the back-and-forth or they want to hear the story. Olive says "story". Otto says he was going to say "back-and-forth" thing, but he agrees to hear the story.

Ms. O starts telling the story. The story goes into a flashback, into the year 1870, with a different town, and the only vehicle they have is a horse. She is owning a fruit stand and agents from Odd Squad, mainly O'Donahue and Olga, would always stop by. Oprah is working on her "juice in a bag" while selling fruit, which is her latest product. Olga requests some peaches, but Oprah has only one. Olga denies it, but asks for those two plums. Just then, Yucks calls them and informs them that the fruit warehouse was robbed. She tells them that they had fourteen cherries, but the thief only took seven of them. They had ten strawberries, but the thief only took five of them. O'Donahue orders Oprah to go to the Odd Squad to file a report. Oprah tells Yucks to watch the fruit stand while she is away. She agrees and tells Oprah about her idea that she had for her "juice on the go" system. It is juice in a boot. Yucks drinks the juice that is in the boot, and it tastes abysmal.

They go inside the warehouse and write down who could have stolen half the strawberries and cherries. They confirm that the thief didn't steal Oprah's five bananas or pears, but they only went after the fourteen cherries and ten strawberries. Five and three are odd numbers, while fourteen and ten are even numbers. Oprah demonstrates the process by drawing a diagram to show everyone that even numbers can be divided into two equal groups. She give an example with her ten strawberries. They both have groups of five when divided by two. Odd numbers, like the five bananas the thief didn't touch, can't be divided. There are two groups of two, with one left over. Oprah concludes that this is associated with odd and even numbers. Olga disagrees and said that this is associated with colors. Cherries and strawberries are both red and Big Red loves red things and they go to catch him.

When Ms. O and Olga arrive at Big Red's house and frame him for stealing 7 of their 14 cherries and 5 of their 10 strawberries, Big Red says he didn't steal anything. He also explains that six out of his twelve mailboxes were stolen a few days back. They ask why he didn't report it and why he has twelve mailboxes. Big Red says that he loves getting mail and he also said that he did report it yesterday via telegram. He discusses how amazing it would be to send a message to someone in just one day. Ms. O tells everyone to focus on her fruit because it is more important.

Ms. O says that she was so angry at Odd Squad and there was still no new news after a week and her "juice on the go" system was not doing well. Oprah also says that her missing fruit could have become rotten by now because it has been a week. Just then, Olga shows up and wants to buy some fruit. Oprah has three oranges, which Olga rejects. Oprah has eleven apples, which Olga rejects. However, Olga notices that Oprah has ten mangoes and decides to take five of them. Just then, a man shows up and tells them that his dog turned into a cactus and he can't pet his dog without screaming in terrible pain. They are too busy to help the man.

Oprah and Yucks go back inside the warehouse and introduce the Mathematical Figuring Out Locale. They review what happened. They had 14 cherries, but only 7 were taken away, which left 7. They had 10 strawberries, but only 5 were taken away, which left only 5. They remember that Big Red had 12 mailboxes, and he lost 6 of them, and he had only 6 of them left. They review the facts, 7 cherries stolen, 7 left behind, 5 strawberries stolen, 5 strawberries left behind, 6 mailboxes stolen, 6 left behind. Everything the thief stole was split evenly into two groups, which meant the original amount was an even number. 14 cherries, 10 strawberries, and 12 mailboxes, are all even numbers. They confirm that the thief didn't take the 5 bananas or 3 pears, because they're odd numbers, and it will leave 1 left over. They then realize that Big Red has 6 mailboxes, and 6 is an even number. When divided by two, the result is three. So the thief could come back and steal three more mailboxes and they go to warn Big Red. Big Red asked if they were going to let the thief steal three more of his mailboxes. They declare that numbers don't lie. Olga finds them and tells them to stop. Oprah proves that Olga is the thief because she only wanted two of her four plums, and when she offered her three oranges or eleven apples, she didn't accept them because those are odd numbers, but when she spotted ten mangoes, she only wanted half of them. Olga then captures them with her lasso and ties them up and runs away. However, Yucks is able to stop Olga with the former's new invention. Olga is angry about her defeat.

Ms. O explains to the agents that since O'Donahue didn't have a partner anymore, she delivered newspapers in Norway, became Queen of Portugal, and then joined Odd Squad, and she became partners with O'Donahue. Olive asks what happened to Yucks. Ms. O explains Yucks took over the fruit stand and she saw her every day. However, she used her last name as Shmumbers because no one wants to drink out of a Yucks Box. Meanwhile, back in a flashback, Big Red thanks Oprah for getting his mailboxes back and rewards them with a way for Odd Squad agents to get around anywhere the world faster. He introduces the Tube system. It squishes a person into a ball and whooshes them around anywhere in the world. He starts digging the Tube System. Oprah says it would not work. The episode ends with Olga finishing cutting a kiwi and growling at Yucks. 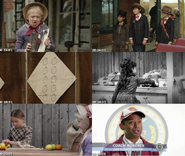