Good Egg Bad Egg is the B-Plot of the 9th episode of Season 2 of Odd Squad.

Ms. O, Olympia, Otis, and Ocean try to determine what kind of creature will hatch from an egg. 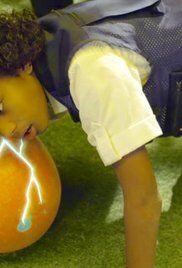 Retrieved from "https://oddsquad.fandom.com/wiki/Good_Egg_Bad_Egg?oldid=51850"
Community content is available under CC-BY-SA unless otherwise noted.