Jinx is the B-plot of the 23rd episode of Odd Squad.

When Odd Squad agents come down with a case of the jinx, it's up to Oscar and Dr. O to save the day and get the jinx cube from Jimmy Jinx.

Ms. O, Dr. O, and Oscar enter Ms. O's office and Ms. O asks Dr. O how they fix the jinx. Oscar realizes that Ms. O doesn't have the jinx anymore. Ms. O says she does because she is just keeping the others outside. Dr. O says that they have to find the villain Jimmy Jinx and get his Jinx cube. Oscar says that they work inside headquarters, not go outside and solve cases. Dr. O agrees with Oscar. She says that they can't do this because this isn't who they are. Ms. O says she knows that they are scared doing new things but she trusts them to solve the case. Oscar accepts her compliment. Ms. O rattles a toy, indicating that they have to go see Baby Genius. She yells at them to go.

Meanwhile, back at headquarters, when Ms. O is finished checking in on Oscar and Dr. O, Ms. O tells them the good news, which is that Oscar and Dr. O are on the case, in which everyone is still talking at the same time. They find it so annoying that they're not going to get any work done. They all decide to play charades and they all argue about who came up with the idea of playing charades.

Meanwhile, Oscar and Dr. O have reached the building of where Jimmy Jinx lives. They enter the building where they see Noisemaker, who welcomes them to Villain Estates and he calls Dr. O and Oscar "evil scientists". Dr. O tells Noisemaker that she is a doctor, not an evil scientist. Oscar also tells Noisemaker that he is a scientist, not an evil scientist. Dr. O tells him that they're from Odd Squad. Noisemaker suddenly remembers because he gave them chocolate that resulted them in making odd noises. Oscar tells Noisemaker that they're looking for Jimmy Jinx. Noisemaker says he doesn't like Jimmy Jinx because he always tells him to turn down his music. He also tells Dr. O and Oscar that he can't tell them which floor he is on because there is a No Tattle Tale Code. He gives them a word problem to find Jimmy Jinx's floor. The word problem says "If I have eight trumpets, and you have five fewer trumpets than me, how many trumpets do you have?". This leaves three as the answer. This means Jimmy Jinx is on the third floor. Oscar comes up with two catchphrases before going: "It's tractor time!" and "Let's get our shoes on and start...". However, he doesn't finish the latter catchphrase.

Meanwhile, back at headquarters, the others are still playing charades with Ms. O blindfolded like Marco Polo. They admit that charades was a terrible idea.

Meanwhile, Oscar and Dr. O have taken the elevator to the third floor and they enter the third floor and they find four possible doors Jimmy Jinx could be in. They meet Tiny Dancer and tell her that they're looking for Jimmy Jinx. She decides to help because she doesn't like how Jimmy Jinx doesn't separate his recycling. They ask Tiny Dancer if she is villain. She says that she is and she has a strict No Tattletale Code and gives them the clue that would help them figure out the word problem, to find Jimmy Jinx's apartment. She leaves laughing and dancing. There are four doors numbered 7, 8, 9, and 10. Oscar and Dr. O review the clues. Door number eight belongs to Symmetric Al. Door number ten belongs to Shapeshifter. One less than door eight is Even Steven, and two more than Even Steven is Jimmy Jinx's apartment. Given those clues, Even Steven lives in door number seven and they conclude that Jimmy Jinx is in door number nine. They knock on Jimmy Jinx's door at the same time. The door opens and it indeed was Jimmy Jinx. He asks if they want anything. Oscar tells him that Odd Squad has the jinx and they need his cube to fix it. Jimmy Jinx tells them that he is a villain and doesn't really help people. Oscar explains to him that they were scared to try new things, too, so they just stayed in their headquarters. But now, they're outside and able to solve a case. Jimmy Jinx gives Dr. O and Oscar his cube, and they go back to headquarters and cure everyone. They yell "Yeah! You did it!". Oscar tells them to celebrate separately so that they know that it worked. They celebrate one at a time that it worked. Ms. O congratulates Oscar and Dr. O for fixing the jinx disease and she permits them to go back to their regular Odd Squad duties. Oscar and Dr. O say that they liked being out of the office. They would like to do it again. Ms. O lets them go. 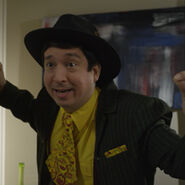