Math Room, also known as Carol by Ms. O and O'Donahue, is a main character in Odd Squad.

The Math Room is a virtual space construct that Odd Squad agents retreat to by twisting their badges to visualize mathematical problems. She is made out of sentient origami papers.

Ms. O - The Math Room is good friends with Ms. O, as the latter calls the former Carol, and they knew each other when Ms. O was still an agent.

Beta version of the Math Room

Displaying the numbers on basketball jerseys 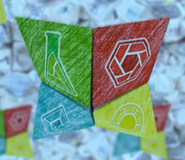