No Ifs, Ands, or Robots

No Ifs, Ands, or Robots is the A-plot of the 31st episode of Odd Squad.

When one of Oscar's Oscarbots goes haywire and gets loose, Olive and Oscar need to find out why Oscarbot 10 is boxing everything up.

This...is no use crying over.

Otto and Olive are on a case where a man has a whispering voice and his feet turned to cement. However, they don't see that person. They say that they are Ms. O said there is a person with a foot and voice problem here. That man doesn't know they're at that place. Otto asks if there is anybody out there with a foot and voice problem. The man says he is far away from where they are. They think they came to the wrong place. The man says he will come. They decide to wait for him. An hour passes and the man still hasn't come. Olive decides to wait for some more time. Three more hours pass and the man still hasn't come and they decide to leave. They leave. Now the man is disappointed because Olive and Otto left and he has to call Odd Squad again. He wonders where his phone is but he left it far away from him.

Back at headquarters, Olive tells Owen "Good morning!". Owen tells Olive that it's not a good morning because he has to re-brick the whole door. Olive says it's good. Owen says he gets to play with bricks all day and thanks Olive.

Oscar calls Olive and asks her if she remembers the Oscarbots he made to help Ms. O make the perfect juice box. Olive explains that there were 25 of them and no one would be able to forget. Oscar explains that Ms. O didn't like how her juice boxes kept falling apart so he made Oscarbot number 10 stronger. Oscar explains that 10 is his new number. It was formerly 27, until he missed bus #27 yesterday. He explains that while he was doing it, Agent Orchid came in and scared him half to death. Oscar tells Orchid that she boxed up his gadget and the juice box is so strong that he is unable to open it. Olive asks why Oscarbot 10 boxed up only one gadget if he was attracted to the number ten. Oscar compares how when popcorn is microwaved for too long, it kind of gets black and browny, whereas something similar happened to his brain. Oscar's wonders who it's after. Oksana complains that her cake is boxed up. Olive and Oscar go to catch the Oscarbot.

Meanwhile, back in the main HQ, Oksana explains that she was making a 20th anniversary cake to celebrate the 20th cake she made when Oscar came and boxed it up. Oscar says it was not actually him, it was a robot version of him. Oksana asks Oscar if he made the robot. Oscar says "yes". Oksana tells him that it was still him that did it. Oscar asks why Oscarbot 10 is interested in a 20th anniversary cake. Oksana shows Olive and Oscar a pencil sketch of her cake. Oscar shows Olive a watercolor of the zapped gadget. They realize that both the gadget and the cake are rectangular prisms. Olive discusses to Oscar and Oksana about rectangle and rectangular prisms and realizes that Oscarbot 10 is headed to the wall of bricks that Owen is building because bricks are rectangular prisms. Olive, Oksana, and Oscar head there.

Meanwhile, back in the main HQ, Olive is telling Owen to tear down the wall because those are rectangular prisms and Oscarbot 10 is going to box them up unless the bricks are destroyed. However, the Oscarbot comes but doesn't box up the bricks. Suddenly, they hear Orchid screaming. They go find out what's wrong. Orchid is blaming Oscar for boxing up her toy. Oscar tells Orchid that he didn't do it. It was an Oscarbot, a robot version of him. Olive asks Orchid to describe her toy. Orchid says she can't but she can show them the papier-mache sculpture that she made of it. It turns out that the toy boxed up was not a rectangular prism, it was a sphere. Olive discusses to Orchid about a sphere. Just then, three people get boxed up. Dr. O, Oren, and Olga are now boxed up.

Meanwhile, Odenbacker gives Otto a badge just like he wanted, but it's too big for him to wear. Otto asks how he is supposed to wear the badge. Odenbacker asks if he wears badges. Otto says "yes" and he asks Odenbacker if he has been to the main headquarters. He says "no" and this is on him and he also thinks he should have done a better drawing, like put a car or a building next to it, so that he can compare the size. He then decides to destroy this badge and build Otto a fladge. Otto corrects Odenbacker and says badge. Odenbacker also says "badge". Odenbacker then gets to work on making a new badge for Otto.

Meanwhile, Odenbacker gives Otto a badge with a number 70 on it, and that badge is now the perfect size for Otto to wear. Otto finds Oscar but realizes that it's an Oscarbot. Olive and the real Oscar find Otto and take him away to keep him safe. Oscar says there are three shutoff switches, two on his ears and one on his neck, but those switches need to be hit the exact same time or it won't work. Olive and Oscar argue about why he made it complicated. Olive tells Otto to destroy his badge because the Oscarbot loves the number 70 and is attacking the three. They try to escape but Odenbacker saves the day by throwing the fladge on the Oscarbot. Odenbacker says that he told them it would be useful. Odenbacker realizes that Otto's, Olive's, and Oscar's badges are all destroyed. Odenbacker asks them to take a seat. The rest say they're fine. Odenbacker says he means on account of their badges, but reconsiders the thought and thinks he was talking about fladges. 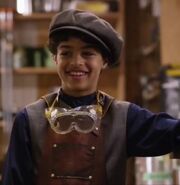