Kevin Noisemaker is a villain who wants to fill the world with odd noises. He wears a variety of instruments all over his body that makes sounds whenever he moves. He tricked Oscar into giving Odd Squad musical chocolates. He is the secretary of the Villain Estates apartment building. He is played by a different actor in "Undercover Olive" and "Oscar of All Trades", the same actor who played Tentacle Man. In "Olympia's Day" and "Otis's Day", he is played by the actor who played Sven Jorganson.

In "Flawed Squad", Noisemaker appears as one of the villains who breaks into Headquarters, and eventually breaks off from the group to become the bait.

In "Otis's Day", Noisemaker attempts to enter the villain protection program, but later decides not to because he had so much fun with Otis and doesn't want to not see him ever again.

In "Villains In Need Are Villains Indeed", Noisemaker says to Otis, 'it's like we're going to be partners again'.

Noisemaker usually isn’t trusted by many of his fellow villains, but seems to be oblivious to this. He thinks Otis is his friend (Otis is definitely not his friend). The one villain he does dislike is Jimmy Jinx, who always tells him to turn down his music.

Making chocolates that cause the eater to make odd sounds. 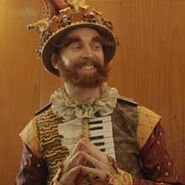