Odd Outbreak is the A-plot of the 16th episode of Odd Squad.

Dr. O takes the lead on the case of a strange medical crisis that causes agents to make funny noises.

When they’re back at headquarters, Otto is soon in the back of a long line of agents. Oscar, tired of people not turning in their gadgets on time, has been offering chocolate to anyone who returns a gadget. Otto doesn’t have any gadgets on him, so he’s created a fake by gluing together a flashlight, toothbrush, and spatula.

Oscar hands Dr. O a bar of chocolate, but her assistant, Odell, comes and tells her there’s a medical emergency. She puts the chocolate in her pocket and heads to the tube lobby, where they find two agents making really odd noises. Ms. O arrives with two more infected agents. Dr. O and Odell take the four of them back to the Medical Bay.

After they put tape on all of their mouths, they take a survey of the agents using charades and find that the thing they have in common is that they all traveled through Tube 3. As they leave, Otto tells them that he’s having a medical emergency - Oscar doesn’t think his fake is a gadget! He needs chocolate! Dr. O gives him a gadget, and heads to the tube lobby.

When they arrive, Dr. O and Odell demand the tube operator to shut down Tube 3, because that's what causing the odd noises to happen. The tube operator says that's impossible because he washes the tubes 11 times a day. Just then, an agent travels down Tube 3 and is speaking fluent English, not oddness. Just then, they find that more people have been infected, including Ms. O and Otto. Dr. O realizes that whatever causes the disease must have happened between the time when she saw Otto last and now - and during that time, he ate Oscar’s chocolate.

They find that all of the other infected agents ate the chocolate too. It turns out the chocolates were the ones that caused the noises. They realize that Noisemaker had made these chocolates. Oscar hadn’t realized it said Noisemaker because he thought they were French, pronounced No-waz-mak-air. Oscar captures the Noisemaker and heal the agents, including Otto. Unfortunately, Otto eats another one of Noisemaker's chocolates, but this time it makes a sound like the playing of a harp, which is good for everyone and they read magazines in peace. 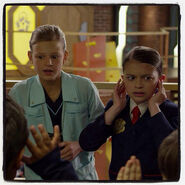