Odd Squad Wiki
Register
Don't have an account?
Sign In
Advertisement
in: Season 2, Episodes with Songs, Episodes,
and 6 more

Oona, Olympia and Otis accidentally change the past, which alters every odd case that Odd Squad ever solved.

This...is a taco not wearing pants.

The episode begins with clips of Ms. O in action with narration to go with it. It's later revealed that Odd Squad's celebrating Ms. O's 100 years of service at Odd Squad. At the suggestion of Olympia, she, Oona, and Otis travel in time to 1983 and accidentally change the past, leading to disaster -- the most notable change being Odd Todd running Odd Squad. The agents hurry to find a solution to their problem -- and that starts with Ms. O. Only, she isn't Ms. O anymore -- she's just Oprah, and is working at Shmumbers Juice Factory as the third-best straw sharpener in town. She refuses the agents' help, despite their -- and O'Donahue's -- persistence. Eventually, she's called in by Odd Todd who secretly gives her a juice box with truth serum and spills the truth about the others' location: the Museum of Modern Odd.

Oprah eventually comes to help O'Donahue and the others, and reveals her agent suit. Together, along with the help of everyone who's been affected by the oddness, the five move past the doors and the guards, but in the last room with the gadget they are seeking, they are interrupted by Odd Todd, who comes out and challenges them. Oona manages to repair her gadget, and the trio of "future agents" return to the scene to see what's wrong: the blast from the gadget flipped the number 6 on the building. They meet up with Oprah, who is nervous about becoming a Ms. O once she finds out the truth -- but once offered some words of encouragement, she gains confidence and goes inside to face her boss.

Back in the present, everything returns to normal. However, Ms. O tells them about the other times they will soon travel back in time, which leads to them gearing up to go back in time to the middle ages with 80's-style hair. 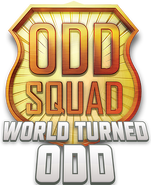