Tan skin, wavy brunette hair in a low ponytail that is similar to Olympia's

For the recurring agent seen in Season 3 with a similar name, see Oliver.

Olive was an agent at Odd Squad. Her partner is Otto. She was one of the main characters on the show and is portrayed by actress Dalila Bela.

Olive was an agent who has worked at Odd Squad for many years, the opposite of her partner Otto. She is a veteran agent and a serious worker that always focuses on the task at hand, (unless the subject turns to her favorite sports team, the Bears). Sometimes, she is noted to be too serious and in need of lightening up a little. Her old partner was Agent Todd (now known as Odd Todd). Her agent number is 63, and she alternates between disliking and liking the band, Soundcheck.

Otto is Olive's partner and best friend. Together they are the best two that Precinct 13579 ever had, as Oscar put it.

Olive and Otto's first interaction is unseen in the series, but in "Training Day", Olive first sees Otto's Academy profile picture after departing with Todd and is weirded out because of Otto's lack of posing for pictures.

Olive will always encourage Otto when he's upset. She knows that a visit to the Cookie Room or Donut Room will calm him down when he is upset.

When the two are really excited, they start talking at the same time. The episode "Jinx" is centered around the trait. When Olive and Otto are together they sometimes tend to be somewhat dorky and cheesy. Olive and Otto both share a love of inspirational speaking and words involving the subject of "heart".

The two do have their differences. In "Recipe For Disaster", there are conflicts about how serious Olive is or how laid-back Otto is. They end up exaggerating on how serious or laid-back they are. In the end, the two apologize for that and almost hug until Ms. O interrupts them.

In "Disorder in the Court" when Olive and Otto are hanging out on the swing set, Otto tells Olive "We're not just partners, we're friends. Nothing will ever change that."

In the Season 1 finale "O is Not For Over", Olive refuses to take the job of her dreams (running her own Odd Squad) without Otto. In the end, Ms. O offers Otto the job of running his own Odd Squad along with Olive as Mr. and Ms. O. Otto asks if he and Olive have to be married considering their new job titles, much to Olive's surprise as she exclaims "No!" and tells Otto not to make the situation weird. Hearing that, Otto accepts the job.

The Burly Bears are Olive's number one favorite basketball team. When she is around them, she becomes excited and jumpy which is extremely out of character for her.

Ms. O is Olive's former boss and friend, who sees Olive as probably the best agent at her Squad. She trusts Olive to solve big cases more than her partner Otto as seen in "The Trouble with Centigurps". This makes Otto somewhat jealous. Oprah has known Olive long before she's met her partner Otto; she feels sorry for Olive concerning her old partner Todd and regrets partnering the two together.

In "Training Day", Todd's genius fast thinking puts Olive at a disadvantage when solving cases, and shrinks her self-esteem; when Todd released a Pienado into headquarters and Ms. O and every other agent is down, Oprah tells Olive to solve the problem. However, Olive tells her that Todd does all the work and she can't do it as fast as him. Oprah tells Olive:

After hearing that, Olive undergoes a personality change, becoming bolder and deciding to wear her hair in a ponytail. Olive closes up the pienado's entrance with the Triangle-inator gadget. This moment is most likely what earned Oprah's respect.

Oscar is Olive's co-worker and friend. Olive and Oscar are rarely together unless they are with Otto, except for in "Oscar of All Trades" where Otto is completely absent and Oscar tells Olive his story.

In "O is Not For Over", Oscar trains Olive to be a "Ms. O" by helping her pick out her signature drink.

Olympia is a friend of Olive. Olympia views Olive as her idol alongside her partner Otto and Olive appears to find that somewhat weird. The two work together in "Odd Squad: The Movie", but barely get to know each other due to Olympia's excitement to work with her.

In the OddTube episode, "Interview with Olive", Olympia gets to know a little bit more about Olive. When Olympia asks Olive to give her some tips on how to be more like her, Olive tells Olympia that she shouldn't be like her and she should be herself. She also says she's seen Olympia in action and she is one of the best agents she's ever seen and that she has a bright future at Odd Squad. She also asks Olympia to believe in herself because Olive herself believes in her, which causes Olympia to explode with joy.

NOTE: Olive appears in all of Season 1. 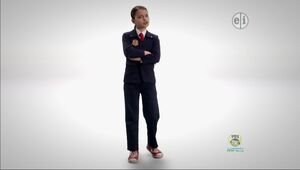 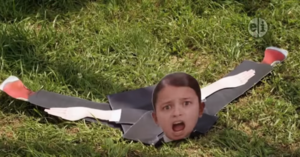