Odd Squad Wiki
Register
Don't have an account?
Sign In
Advertisement
in: Season 2, Episodes, Episodes with Songs,
and 4 more

Orchid's Almost Half Hour Talent Show is the A-plot of the 18th episode of season 2.

All the agents, especially Olympia, want to be a part of Orchid's talent show.

All the agents want to be in Orchid's talent show...most especially Olympia. Orchid says no, but when Olympia convinces her to add one more person, Olympia can join. Olympia asks Ocean to join the talent show. He immediately says yes, but Coach O wants to go in too. However, Orchid has to take Olympia out because The Big O wants a role in the show too.

Eventually, Olympia convinces Orchid to let her in on the show only if Olympia finds 9 more talents for the show, bringing the total number of acts up to 20, with one minute for each. When it's Olympia's turn to go on stage she realizes she has nothing to show. When she gets on the stage she has nothing to say and just stands there. Otis saves the day by jumping in to help Olympia sing a song and dance based on their secret handshake.

Olympia is going to be in the talent show. 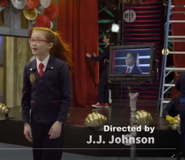 Olympia needs more guests to act in the talent show.
Community content is available under CC-BY-SA unless otherwise noted.
Advertisement