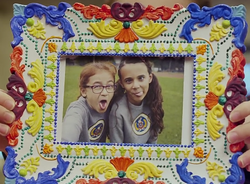 For the Orla seen in Season 3 who is a main character, go here.

Orla is Agent Olympia's friend from the Academy. Her picture was first seen in the background of Olympia's Agent Interview.

During the OddTube episode "Your Questions", Olympia told the viewers Orla's name in response to 'Jordan's' question.

Orla has lighter brownish skin, long cup length dark brown kinky curled hair tied into two twin pigtails and grey eyes. She also has a different tone of skin than her best friend and is bi-ethnic.