Orson is a baby agent who enjoys milk, teething, and playing with his rattle. He was promoted to Director in place of Oprah in the Season 2 finale. His dream is to become Captain Fun. He is one of the youngest employees of the precinct. 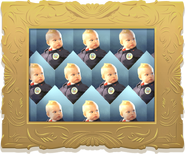