When people in town can no longer count down, Olive and Otto must uncover who is causing the problem and why, so Ms. O can count down the new year.

Olive and Otto are on a case where a woman has been hearing the same song, everywhere, over and over. Olive declares that it is Gerard, and shows Otto a man playing music inside of the woman’s head. She tells Gerard to play different music, and the woman prefers the new tune. Olive mentions to Otto that he has a guy named Bob in his head.

When they are at headquarters, Olive is listening to “K-O-D-D DJ K-Berg” counting down the top 100 songs of the year. K-Berg is now on song 66. Olive is trying to decide whether she hates New Year’s Eve or loves it, and Otto asks what she’s talking about. Olive explains that every year, she makes a list of resolutions, and that she has completed 91 out of 100 this year. But she has to finish all 9 before midnight tonight, which she can only do if Ms. O doesn’t call her on a case-

Ms. O immediately calls her on a case. They head to Ms. O’s office, where they see Mayor Macklemore. She and the Mayor explain that Ms. O has been asked to do the official New Year’s Eve countdown. It’s a big deal. She then tells them that something very odd has happened at Tommy Banfield’s birthday party.

At the party, Olive explains to Otto that she needs to do all 9 resolutions while on the case. She completes number 9- learn Spanish- and then is interrupted by the kids. They explain that while playing hide-and-seek three days ago, Tommy stopped counting at 11 and is now repeating 11 over and over. They have been hiding behind a couch ever since and they've also run out of cake to eat. Olive asks that if they've been hiding behind a couch for three days. One of the kids says that they can't come out until Tommy finds them because that's the hide-and-seek rule.

When Otto tries to show Tommy how to count down, Otto is unable to say any number below 11 either. The other kids try too, but can’t. Otto asks why this is happening, and hears ominous music… from Olive’s 8th resolution, practice more violin. They return to headquarters, where Ms. O says it’s a countdown crook- someone who’s been counting down so much, no one else can do it, similarly to a number hog. She gives examples of events that are associated with counting down that are unable to happen. Rockets are unable to blast off, runners are unable to start their race, and there will be no more rocket races. She then realizes that this means she can’t do the New Year’s Eve countdown, and tells Olive and Otto to look for the only person who can still count down.

They suspect DJ K-Berg, who has just announced songs 51, 50, and 49. They steal Agent Olson’s toy car, and drive it to DJ K-Berg. The car breaks down, and Otto suggests that they should have just used the tubes, but Olive fixes it and they drive to K-Berg. When they get there, they don’t see K-Berg, but hear her talking. Otto thinks she’s invisible, but K-Berg comes in and explains that when she couldn’t count down, she played last year’s top 100 instead. This means DJ K-Berg is not the countdown crook.

When Olive brings up her resolution list, she says that she’s done 9, 8, and now is on 7. Otto announces that Olive is the countdown crook! They go back to headquarters. Dr. O examines her, and says that to cure her, she has to sit in a bucket of pink goo for two weeks. Ms. O arrives in a sparkly countdown suit and tells them they need to cure it by tonight. Otto suggests making sure Olive doesn’t care about counting down, ending the curse, by fulfilling all of her resolutions.

Olive takes a hot air balloon ride with a giraffe (7), rides a bicycle on top of another bicycle (6), jumps higher than she’s ever jumped before (5), discovers the lost city of Atlantis (4), learns to use the new Odd Squad computer program (3), does the chicken dance with a chicken (2), and, at 11:59, tells Agent Otto what a great partner he is (1). Ms. O, Mayor Macklemore, and a large crowd count down to New Year’s Day. 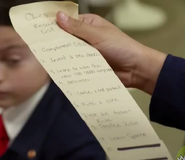 Ms. O and her phone, at the party
Community content is available under CC-BY-SA unless otherwise noted.
Advertisement