Rise of the Hydraclops is the A-plot of the 17th episode of Odd Squad. It is also the first part of the special "Odd Squad Saves the World".

In order to save humanity, Olive, Otto and Oscar must locate a treasure chest that Oscar buried.

Olive and Otto are on a case where whenever a man clicks his pen, he teleports somewhere else. Otto asks how the man started at his house. He says that wasn't his house. He hasn't been home for six weeks. Olive gives him a new pen. They leave and that man asks where the plane is going. It's going to Boston. He replies that he has family there. When they return to headquarters, Olive casually says to Oscar, “Happy Friday.” Oscar had thought it was Thursday, and panics because “The Arrival” is happening today. Oscar and Ms. O explain that the deadly Hydraclops is going to rise out of the town lake and destroy the world. But when Oscar was five years old, he buried a weapon that could defeat the Hydraclops. While Olaf and Ms. O go to the town lake to evacuate everyone, Olive, Otto, and Oscar go to the area where the weapon was buried and consult Oscar’s map.

To stop anyone else from getting the weapon, Oscar didn’t measure with feet or meters, he measured with his teddy bear, Norman. They count out 10 Normans from a certain tree, and then dig until they find... another map. This map tells them to measure in SchmumberCrunch granola bars, which none of them have. While Otto stays back and plays with Norman, Olive and Oscar go to headquarters and search for a SchmumberCrunch.

Ms. O explains to all of the people near the lake that an ancient horror, the Hydraclops, will rise up from the lake to destroy the world. It will be doing this. At that point, Olaf demonstrates what the Hydraclops will do by jumping around, making odd noises, and screaming. Everyone flees. Back at headquarters, Olive and Oscar find that O’Malley has a SchmumberCrunch bar. He refuses to give it over, but Oscar tries to explain to him that they need to use it to stop the Hydraclops. Oscar says that they don't actually need the granola bar. They just need something that is the same size and ask to borrow it. Olive suggests measuring with something the same size as the bar. A gadget is too long. An eraser is too short. O’Malley’s giant blue sword is definitely too long. But Oscar finds a pencil that’s the same length.

They go back to where Otto is and measure with the pencil and find yet another map. However, Oscar says that this is the last map they need to find. This one says to measure with Oscar’s own footsteps. But after this leads them to an empty hole, they realize they need to measure with Oscar’s five-year-old foot. They find the right place and dig up a treasure chest and head towards the lake, where the Hydraclops has risen. Oscar opens the treasure chest and pulls out... a really stinky sock. But Olaf explains that it is effective because the Hydraclops monster has heightened olfactory sense due to its increase in nasal capacity. The sock forces the Hydraclops away... for the next hundred years. Then, it will return with its siblings. Everyone takes off their socks. 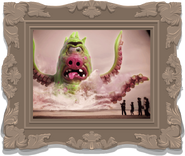