Skip Day is the A-plot of the 9th episode of Odd Squad.

When Agent Olive catches the case of the skips and goes missing, rookie agent Otto must solve his first case by himself.

This....is my collection of rocks.

The episode opens with Olive and Otto on the scene of a case. A man explains to them that he is having an issue with his SUV. He climbs into the backseat, and when he reemerges, he has turned into a kid. Otto pulls out his “Car-Fixinator” gadget and aims it at the vehicle; just as he’s about to fire it, a second, older man runs up and dives into the backseat. When he comes out, he too is a boy. He remarks that the age change is amazing, then invites the first man to go on a bike ride. The man accepts, and the two head out. The agents watch them depart and Olive swoons about what it must be like “to be young again”. Otto pauses and gives his partner a look, then asks her what she just said. Olive quickly switches gears, then tells him it’s time to go. Both agents leave the garage, but not before Otto once again asks his partner about what she said.

Olive and Otto arrive back at HQ and enter Ms. O’s office. She starts them on their next case by having the town’s baker explain her odd problem. The Baker shows the agents that her cake is runny and soupy, instead of light and fluffy. The team reads the baker’s cake recipe card and notices that she accidentally skipped every other step, resulting in her frosting and adding candles to the cake without baking it. Olive then asks the woman to walk across the room for her. She complies, but skips instead of walks. Olive deduces that the baker has a case of “The Skips” - a medical condition that makes you skip steps as well as actually skip. Ms. O cautions that the illness is contagious, and calls Dr. O into the room. She comes in and quarantines The Baker.

With the situation seemingly handled, Olive and Otto leave Ms. O’s office. Olive remarks that she’s relieved that the problem is under control because she still has a lot of work left on her to-do list. She hands Otto a copy of her list -- which just so happens to be her #3 thing to do on it -- then leaves the office to get her projects done. As she goes through the main doors, Otto chuckles about how his partner seems so serious most of the time, yet is merrily skipping off. Quickly he realizes that Olive must have caught The Skips - seeing as the one who catches them doesn't even know they have them. He and Dr. O chase her into the tube lobby, but miss her getting whooshed off. After getting a tip-off from Dr. O, Otto sets out after her to try to inform her of her condition. Dr. O checks up on the current Tube Operator's cough, which sounds like a honking horn; Dr. O remarks by saying "Ah, it's getting better.", before leaving. Otto arrives at the tennis court, only to find out that Olive never showed up for her tennis game and her opponent won again. He is surprised by the fact that she was at Polly Graph’s hot chocolate stand instead and she also skipped the step where she should take the cup and ended up actually pouring the hot chocolate and threw the marshmallows on the ground; Otto is puzzled to find that Olive skipped from 3 to 6 on her to-do list. Further tips show Olive swimming (without putting on a swimsuit first) and going to the basketball court, without changing to her basketball clothes. Otto decides to go to the Math Room to figure out Olive’s skipping pattern.

The Math Room generates a number line, and Otto discovers that Olive is skipping by three's. Her next stop is number 15 on her list, which is skydiving. Otto briefly celebrates his findings, but then realizes that since Olive is skipping steps, she might have forgotten to put on a parachute before jumping out of the plane. Olive is falling down, screaming. He rushes out to where she is and catches her in free fall with aid from a jetpack.

The agents head back to HQ and Olive praises her partner from a glass room in the lab; Otto accepts her words and says that he wishes there was a better way to get rid of The Skips. Dr. O enters the room to start the treatment. She presses a button on the wall and some music starts playing; the Baker and Olive start skipping in circles and singing “Skip to my Lou”. The baker asks how long their treatment will take; Olive tells her they should be out in a week.

The episode ends with the camera panning out to show headquarters as Olive and The Baker skip to the song.

View the transcript for this episode here. 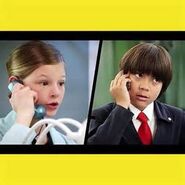