Soundcheck is the A-plot of the second episode of Odd Squad season one.

Olive and Otto must figure out how and why things are disappearing around town when all Otto wants to do is listen to a song by his favorite band, Soundcheck. When they find out that Soundcheck is causing the disappearances, Otto gets a chance to sing with the band.

The episode begins with Olive and Otto in Ronnie and Donnie's living room. Ronnie explains that he had warned his brother not to eat so many cheesy curls or he would turn into one, but this is exactly what has happened. Olive advises him not to worry; she and Otto have an Uncheesycurlinator. Otto reminds her that she has said the thing would never be used, but she ignores him and zaps Donnie, who returns to normal. Ronnie welcomes him back, and Olive concludes that their work is done. Otto enters the tubes, but Olive pauses to share an affirmation for the team (the Bears) the brothers are watching before doing so herself. Immediately after they leave, Donnie eats another cheesy curl and returns to the form of one. Ronnie, annoyed, tells him he can just watch the game like that, and he proceeds to do so, cheering with squeaky noises.

Back at Headquarters, Olive approaches Otto's desk and gets his attention. Otto excitedly tells her she won't believe which band has a new song. Olive begs her partner not to say it's Soundcheck, but that is the answer he gives. He continues that it's entitled "Take Away Four" and proceeds to play half of a verse and a chorus of the music video on his computer, singing along (much to Olive's annoyance). Olive pauses the music video and asks how he can enjoy such "yeehh" artists. Ms. O approaches and inquires who Olive is talking about. When she explains, Ms. O starts fangirling and runs off to her office to get the song, but not before ordering Olive and Otto off to the town square, where odd things have happened. The two partners get up and leave, while Ms. O fangirls the entire way up the stairs.

In the town square, Olive and Otto meet a man who was listening to "Take Away Four" in his minivan when all four tires disappeared. (He and Otto start to sing the chorus, but Olive interjects.) Then the Baker runs up, reporting that she was listening to the song in her bakery (singing it again with Otto and the first man, much to Olive's chagrin) when she discovered that only eight bagels out of the twelve she had put into the oven were still on the baking sheet. Olive asks aloud why tires and bagels are disappearing. Otto sings (to the tune of "Take Away Four") that both are circles, and Olive snaps at him before realizing he's right. Otto asks who likes circles enough to steal them, and he and Olive come to the same conclusion: Circle Sue.

In Circle Sue's triangle-themed lair, Sue explains that she now prefers triangles to circles and denies taking the objects, but offers to help - by playing "Take Away Four". She and Otto dance, but Olive couldn't be more annoyed. Suddenly, Sue stops mid-dance and screams. When Otto asks what happened and once she pauses the music, she observes aloud that only one triangle-shaped chair is left of the five she had! Olive observes that it must not be a circle issue if triangles are also disappearing. Otto asks what it might be; Olive replies that she doesn't know, but a visit to the Math Room might help. The partners twist their badges and spin off to the Math Room, and Sue (needing to visit her "safe place") puts her head inside a triangle-shaped thing hanging from the ceiling.

In the Math Room, Olive reviews the facts of the case: first wheels disappeared, then bagels, then triangle-shaped chairs. She suggests finding a pattern between the three sets, asking the Math Room to set up some counters. When Otto asks to clarify, she explains that counters are small versions of the real things that they can use to represent them. The agents discover that four chairs, four bagels, and four tires were each taken away. Otto notes a similarity to the Soundcheck song and starts to sing it. Olive doesn't stop him, because he's on to something - four thing disappear wherever the song plays. "Take Away Four" actually takes away four! Otto quips that if music is the problem, maybe music is the answer...

At Soundcheck's studio, Olive explains the situation to the band members. While Otto fanboys, Olive suggests that they change the lyrics so instead of subtracting, they sing about adding four. Tony D, Ringo, and Jonny J like the idea, but Danny T quits, refusing to change the song. The other band members explain that they need four people to sing the song, so they need someone who can sing, knows all the band's moves, and is willing to use an uncomfortable amount of hair gel. Everyone looks at Otto, who squeezes the contents of two bottles of hair gel into his hair.

Later, in Ms. O's office, Olive, Otto, and Ms. O watch the new music video, starring Otto. Olive recalls how she used to feel about Soundcheck, adding that she feels the same about the band but thinks Otto did a good job. Ms. O concurs, saying that the disappearances have been reversed - but the new song now adds four to everything else! She displays photos of five suns, five ears of corn on one stalk, and a zebra with eight legs to the horrified partners. She claims the only solution is to play both songs - forever. With that, she starts a remix. Olive crawls away in defeat, but Otto and Ms. O dance their hearts out to the quicker-paced remix. 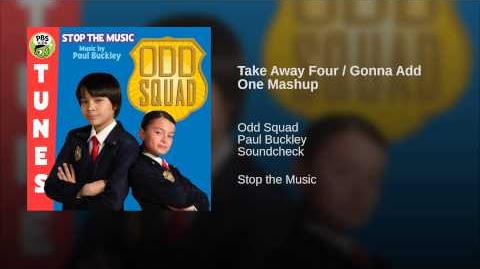