Switch Your Partner Round and Round

Switch Your Partner Round and Round is the B-plot of the 28th episode of Odd Squad.

With the help of the "What-It-Would-Have-Been-Like-Inator" helmets, Olive and Otto discover what it would've been like if they had different partners.

At headquarters, Olive and Otto are discussing cases and how many cases solved. They have solved 30 cases as of now. Olive also mentions about someone's lawnmower running out of gas. Otto says it is not actually an odd case, but he says they're glad that they helped him out and he and Olive do their handshake. Just then Oren and Olaf say "Well, if isn't Olive and Ottawa". They correct them by saying it's Otto. Olaf says that he is Olaf, which everyone knows. Oren says that they are... and stammers. Olive, thinking that Oren and Olaf are trying to insult her and Otto, helps them by saying that she is afraid of pie and Otto joins and tells them that he is terrible at sports. Oren and Olaf subsequently leave them and Ms. O calls them into her office.

Ms. O discusses to the agents that she saw what happened down with Oren and Olaf. Olive and Otto are arguing by trying to explain that Oren and Olaf are not nice to them. Ms. O says she knows. She appreciates them for telling them to tell the truth. They may be rough, but they're good agents. She also explains that she almost partnered Olive with Oren and Otto with Olaf. The agents are shocked and can't imagine what it's like to be like that. Ms. O gives them imagine-what-it-would-have-been-like-inators helmets and the agents wear them. Ms. O asks them what case they want to imagine. They decide the day when the blob got loose in headquarters. Ms. O tells them to buckle their brains in and activates the helmets with her remote.

A flashback begins where Ms. O is yelling at someone to turn off the alarm. Olive asks Ms. O what the problem is. She says that the blob that they have has escaped. Otto asks how the blob escaped. Oscar proceeds to says that it's a long story and it starts going in a flashback. Ms. O interrupts and says they don't have time for that. She explains that a one-gallon blob is loose in headquarters. Otto asks what a gallon is and says he thought that things are supposed to be measured in inches and feet. Oscar says that a blob is a liquid. Inches and feet are not used to be measured a liquid. Cups, pints, quarts, and gallon are to be used. Ms. O interrupts his conversation and says someone should find the blob now. Otto explains the plan to Olaf. The latter says "Yay!" even before Otto explains the plan. Olaf howls, which Otto doesn't understand. Oren says Olaf wants a potato and gives it to Olaf. The agents officially start. Oren gives Olive a piggyback ride and Olaf does the same thing to Otto to go find the blob and all the agents fall down and get injured.

The episode goes back into the present and Olive and Otto explain that the plan was horrible and unsuccessful. Ms. O tells them that she also had another idea that was even worse. Olive would be partnered with Orchid and Otto asks whom he would be partnered with. Ms. O tells him that she gave them secret helmets so he shouldn't be asking that. She zaps the helmets with her remote again.

Another flashback begins where Oscar is explaining that a blob is a liquid. Inches and feet are not used to be measured a liquid. Cups, pints, quarts, and gallon are to be used. Ms. O interrupts his conversation and says that they need all hands on deck to find the blob and wonders where Agent Otto is. Just then, Otto comes and apologizes because Orson was taking a nap. Orson is also missing his shoe and it is unknown where it is. Ms. O orders everyone to find the blob.

Olive and Orchid have found the blob and Orchid uses the container to grab the blob. Then, she and Olive go back to the lab and Otto and Orson also arrive at the lab and they argue about who got the blob. Ms. O comes in and honks her horn and tells them that the blob can split apart, making it a possibility for each of them to have a part of it. They continue arguing saying that they still won, because they still have the most blob. Otto and Orson tell Olive and Orchid that they have more containers than them. Orchid says she has a bigger container than them. Oscar also comes in and honks the horn and says that if they want to find out who has the most blob, they have to use the same kind of container, and a measuring cup is just the thing for that. Ms. O says that they should go to the Math Room to figure it out, but Oscar has a better idea, using the measuring cup that they already have in the lab. Ms. O agrees that it's much easier. Oscar clarifies that Otto and Orson had 1 liter (4 cups), and Olive and Orchid also had 1 liter (4 cups). This means that neither of them won, because they only got half the blob, which means half the blob is still out there. Ms. O tells them to go. Otto decides to handle it with Orson. However, Olive finds out that Orson is missing. Otto clarifies that he is not responsible enough to be partners with a baby. Olive and Orchid agree.

They go to the lab and find out that both of them have two cups, making them tied. Given that they only found 3 liters out of the 4 required, there is still 1 liter out there. Otto complains that he got slimed for nothing. Given that Otto mentioned that he got slimed, Olive mentions that she knows where the blob is, which is on his suit. Everyone scrapes the blob off of Otto and get one liter exactly and they celebrate.

The flashback ends where Olive and Otto explains that it worked well when they were partnered with Oksana and Owen, respectively. They solved the case and they got along great. Ms. O says that she pressed the button too soon. She zaps the helmets with her remote a fourth time.

They go back to a flashback where Ms. O asks for two volunteers for a month-long blob counting mission to Blobsylvania. Oksana and Owen says that Olive and Otto will do it. Ms. O says she has never seen anyone turn on their partners like that. Owen says that he has a dentist appointment, so he is unable to go. Oksana says that she doesn't have a dentist appointment. Otto says he would never do that to his partner in a gazillion years. Olive says that if they ever become partners, she promises she will never do that to him and they do their handshake.

Back in reality, Oscar asks if the helmets should be turned off. Ms. O says that there is no need to because they're having fun.

Back in the flashback, Olive and Otto are getting slimed by blobs and they're having fun. 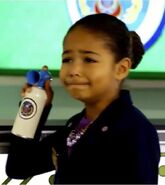