Odd Squad Wiki
Register
Don't have an account?
Sign In
Advertisement
in: Episodes, A-Plots, Odd Squad Against the Odds,
and 3 more

The Curious Case of Pirate-itis

The Curious Case of Pirate-itis is the A-plot of the 30th episode of Odd Squad. It is the 3rd part of "Odd Squad: Against the Odds".

When Olive turns into a pirate, Otto and Oscar must travel to different Odd Squad lab offices to get the gadget that will turn her back to normal before she becomes a pirate forever.

Otto is sitting and relaxing when he sees Olive wearing a strange hat. Otto asks why she is wearing a pirate hat. Olive says she is not wearing a hat, but Otto tells her to take it off. She tries to take it off, but she is unable to because it's stuck on her head. Oscar then comes in and asks if Olive came in contact with a pirate. Olive says "no", but she says she remembers helping a pirate cross the street.

A flashback begins where Olive is helping a pirate crossing the street and the pirate thanks Olive for helping him and apologizes for giving Olive pirate-itis.

Otto is shocked to hear Olive has Pirate-itis. Now Olive has an eye-patch. Olive will have more pirate qualities and Oscar and Otto must stop it before she goes full pirate or she will be a pirate forever. Unfortunately, Oscar doesn't have a gadget to fix this, but he can build one. The three head to the lab and Oscar shows them the Unpiratinator. Unfortunately, only the glove part is there, a sphere, a pyramid and a rectangular prism are missing. Otto points out that there are Odd Squad offices all over the world, so another lab would have the required parts. Olive is not sure she is going to make it in time. They head to Dr. O's office, where Dr. O says she is able to slow down Olive's Piratitis. Oscar tells Olive Dr. O to stay while he and Otto go to the other Odd Squad offices. They leave. Dr. O tells Olive to say "Aah.". Olive says "Aargh!". Dr. O tells Olive to say "Aah." again. Olive says "Aargh!" again. Dr. O finds out that Olive's Piratitis is getting worse.

Otto tells O'Dwyer to send them to the next town over. Oscar tells O'Dwyer to send them to the town after that over because the next town's lab is run by Odie, who is pretty difficult to manage. O'Dwyer squishinates them and they head to the headquarters two towns over. They arrive and they meet Oogetsdorf. Otto finds out that the headquarters that they're in is similar to their own. Oscar says it's not because of the poster. Oscar and Otto exit the tube lobby and go straight to the lab. They meet another scientist, O'Quincy, and they tell him to help them. O'Quincy is surprised to see Oscar. Oscar asks O'Quincy for a favor. O'Quincy says he is a big fan of favors and shows off his favor abilities. Otto and Oscar interrupt him and ask him if he has the missing parts for this Unpiratinator. O'Quincy says he doesn't have all the parts but he has a sphere. He gives the sphere to Otto and Oscar, and the latter puts the sphere in the gadget and both of them thank O'Quincy and leave.

Otto and Oscar head to the next town over to get the next item needed. While riding in the tubes, Dr. O is calling Oscar and Oscar picks up the phone from Dr. O, who informs them that Olive's Piratitis is getting worse. She has a beard now and her feet are soaking in gravy to slow it motion, but that can only do so much. Oscar says that they'll hurry. Dr. O says they will be fine as long as there is no parrot. However, a parrot appears and Dr. O decides to get a cage for that and get some more gravy for Olive.

They meet a tube operator, Ortega, and they go to the lab and meet a scientist, Odelia. Oscar says that he and Otto are trying to build an Unpiratinator but they're missing parts. Odelia gives them the part they need. Oscar thanks them, but finds a snake in the can. Odelia tricked them. Otto says that his partner is turning into a pirate and this is not a joke. Odelia gives Otto a gadget to hold on to and Otto finds out it's a squirting gadget. Oscar asks Odelia how many jokes they should deal with before she actually helps. Odelia says that she will do one more but she will save it for the end. Odelia finds out that they're missing a pyramid and a rectangular prism. She has a pyramid and hands it over to them. They only need to find a rectangular prism. Odelia points out that Agent Odie has a rectangular prism. She saw one in his lab yesterday. Oscar rejects going to Odie's lab but Otto convinces Oscar that they should go there to turn Olive back. Odelia wishes them luck and gives Oscar a high five with a hand buzzer. Otto then admits he loves her.

They are heading to Odie's lab where during the tubes, Dr. O calls Oscar and informs her that Olive is almost full pirate. Her shirt is getting frillier by the minute and she is now speaking like a pirate. Oscar says that he and Otto are heading to Odie's lab to get the last part that they need and they tell Dr. O to tell Olive to meet them there. Dr. O hangs up and tells Olive to go with Oscar and Otto to Odie's lab. She tries to leave but realizes she has to get her feet cleaned first.

Oscar and Otto reach Odie's lab and ask him if he has a rectangular prism. Odie says he does but not for the pirate. Olive, who is now a pirate, arrives at Odie's lab and apologizes for being late. Otto explains to Odie that the pirate is his partner. Odie says he is actually referring to the pirate thief, Oscar. Oscar stole his hair designs. All the haircuts Oscar had were originally Odie's. He stole every single one. Olive asks Oscar why he did it. Oscar admits he made his mistake, but he wanted to be more like him. Odie says he thought it was because he didn't like him. They apologize to each other and hug each other. Otto tells Odie to give them the rectangular prism. Odie gives it to them and Oscar inserts it and it works. However, Olive becomes a pirate and runs away and ensure that they'll never catch her. Otto finds out that her pinkie is not sealed. Otto, Oscar, and Odie catch her. They run and catch her, but to no avail, she keeps running away. They keep running and catching her, but she is able to escape and the other three are unable to catch her. However, Otto comes up with a plan to distract Olive by telling her that there is still some good in her pinkie finger to help him and Oscar turn her back. Olive grabs her pinkie and complains that it's hurting. While Olive is distracted, Oscar and Otto zap her with the Unpiratinator and Olive turns back to normal. Olive thanks them for helping her and Odie asks if he is okay. Odie says he is. Otto, Olive, and Oscar realize that he got a new hairstyle. Odie looks in his mirror and finds out that his hairstyle has changed and he loves it. Oscar congratulates him and unknown to Odie, Oscar growls like a pirate saying he must have it. 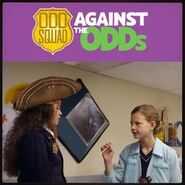