Odd Squad Wiki
Register
Don't have an account?
Sign In
Advertisement
in: A to Z, A-Plots, Season 2,
and 2 more

Odd Squad builds an exact replica of the villain's vault to intercept a jetpack.

This is...counting chickens before they hatch.

The episode begins with Olympia and Otis arriving in headquarters, where Ms. O was waiting for them; she immediately tells them that something very odd has happened since she's trying a new technique in where she cuts the small talk, which both Olympia and Otis support. Ms. O then goes on to tell them that Symmetric Al has stolen her jetpack, and if he shares the jetpack with other villains, Odd Squad'll be done; since flying villains, aren't good.

Ms. O tells the agents that once Al leaves his house, he'll walk through town and to the Villain's Vault; a place where villains keep important things locked up, and that Al himself designed. Once the vault owner gives Al the key to his vault, Odd Squad will never get it back. So Odd Squad tries to trick him into putting into a fake safe that odd squad built, along will a fake town. While Otis is tasked with finding a person to hire someone to play the guard, Olympia is tasked with helping Ozlyn.

Ozlyn explains to Olympia that there are nine different safety deposit boxes, but they aren't sure about which number is Al's key number is his. When Olympia asks if they can just make all of the keys for all of the vaults, Oxley calls Olympia a "key expert" in a polite manner; Ozlyn then says that it takes him a long time to make one key, so they'll need to make their guess count. Olympia then says that they won't have to guess, that instead, they can just find which number is symmetrical, and with the use of the vertical line of symmetry, they decide on the number 8. As a reward for Olympia's work, Oxley gives her his grandfather's golden jacket; when Olympia says "thanks", Oxley replies with, "That's exactly what he would've said.

Meanwhile, with Otis, he's found that Delivery Doug looks exactly like the vault owner. Doug says he doesn't see it, mostly because he's a human being, and that's a piece of paper. With Olympia, the vault's almost done, but are having trouble with the painting, since Ohlm had his thumb over the lens. When Olympia sees that Al's signature is on it, it means that the painting must be symmetrical as well. Oxley sees that Olympia's also a "paints-pert", and gives her his compliments and his great aunt's captain's hat; when Olympia says that they need to focus on the mission, Oxley says, "That's exactly when she would've said." and leaves. 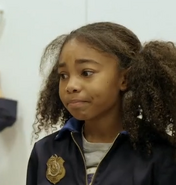