The Great Grinaldi is the B-plot of the 9th episode of Odd Squad.

Otto and Olive investigate a case where the cakes at the bakery, the books at the library, and the bridge, are splitting in half.

Olive and Otto are on a case where whenever a man is trying to step into the ocean, a force field keeps him out. They ask him if he said anything bad about the ocean. He tells them that he had called the ocean cold. The agents tell him that it was not the right thing to do. The man says it's cold again. Otto tells him not to say that again and tells him that the ocean is mad at him and it's keeping him out. The agents tell him to apologize to the ocean. He apologizes to the ocean and compliments the ocean instead and is able to enter. As Olive and Otto go to leave, Olive remarks that the sand is hot, and is immediately stopped by a new force field.

At headquarters, Otto is moving very quickly, and Olive is surprised. Otto explains that he wants to finish work quickly so he can see the Great Grinaldi perform. Otto shows Olive a video of Grinaldi, a magician who can cut anything in half- including himself.

Otto says that Grinaldi inspired him to be a magician. He checks the time and sees the show has already started and he says that he has to go before Ms. O finds something for him to do. But Ms. O appears in Otto’s computer and tells him exactly that as she tells them to go to the bakery.

At the bakery, they see that all of the cakes are split in half. They suspect Halvsie Harriet, and go to her home. But Harriet explains that she always steals one half and leaves the other. Olive asks if everything in her home is stolen, but Harriet quickly changes the subject and tells them she’s been in her apartment all day, knitting half a sweater. Olive gets a call and learns that books at the library are falling apart. Since Harriet had been there with them, they know she’s innocent and they leave.

At the library, Mr. Fonts tells them the books split into quarters, and now they don’t fit on the shelves. Otto suggests Fourthsie Fouriet, but she doesn’t exist. Then Ms. O sends them a photo of the bridge, which had split into eighths.

Olive and Otto head to the Mathroom and Otto notices that it’s the same pattern as the Great Grinaldi. Some magicians cut themselves in half, but Grinaldi wants to be better and cuts himself into two, then four, then eight. It turns out that the bakery, the library, and the bridge are all near the theater. They head to Grinaldi’s show.

Grinaldi reads their minds and learns what happened. Otto tries to put him back together and he fails twice. But the third time he does it, Grinaldi is restored. He fixes everything. They head back to headquarters, where Ms. O give them their next assignment when Otto practices his magic routine and goes to solve the case by himself. 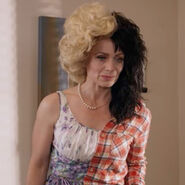