The Jackies is the A-plot of the 14th episode of Odd Squad.

Ms. O and her team will stop at nothing to win their very first Jackie Award, because Mr. O has won all the previous ones.

Olive and Otto are on a case where whenever a man bounces a certain ball, it changes (basketball, soccer ball, etc) Olive gives him a regular basketball, and Otto bounces it one more time... and it becomes a pizza.

When they enter Ms. O's Office, she explains that tonight is the night of the Jackie Awards, given to the Odd Squad Precinct that solves the most cases each year. But Orville (Mr. O) has won every year, since the Jackies were created in 1 CE. Ms. O shows a sign that displays that Orville’s Squad has 100 cases, and Oprah’s has 98.

As Oscar makes Ms. O a sparkly dress, Olive, Otto, Oren, Olaf, and Octavia search for oddness. Olive and Otto find a woman with the Doubles, but it turns out to be identical twins. However, one of the twins has lobster claws. Octavia... finds a cantaloupe, which is not odd. Ms. O tells her to bring her something odd. But Oren and Olaf find a floating person, putting the two Squads equal.

However, Orville calls and tells Oprah that he's worried. Orville tells her to look at her monitor, which shows that he's at 101 and then he tells her to look at the monitor again, which shows that he’s at 150. The agents have to work quickly. Very quickly. Olive and Otto find a person turning into a plant. Oren and Olaf find a black hole. Octavia finds... a pineapple. Ms. O angrily, once again tells her to bring her something odd. Eventually, it all adds up to Orville, 204, Oprah, 200.

Just then, Octavia runs in with coconut, mango, and peach. Ms. O is angry that those aren’t odd, but at that point, the fruit begins talking, Octavia says that she was trying to tell her that the fruits are talking. The agents zap the fruit making 205 odd cases, and Ms. O, wearing 305 sparkly dresses, wins the Jackie Award. 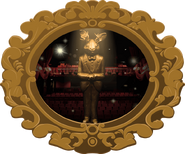