For the similarly-named Season 1 episode, see The O Games.

For the similarly-named Season 3 episode, see The B-Team.

The O Team is the A-plot of the 4th episode of Season 2 of Odd Squad.

Security agents Owen and Ohio secretly provide backup on a case so they can have a pizza party.

This is...a polar bear in a snowstorm.

Olympia and Otis solved their 49th case, and Ms. O informs them that if they solve their 50th, they will win a pizza party for the whole squad. Ms. O send them to a bakery, and when they leave we can see Owen and Ohio spying on them. Owen convinces Ohio to follow Otis and Olympia and give them subtle hints (or as Owen calls it, a helpful hand), that will lead them to solving the case and winning the pizza party. Owen refers to this helping hand and as the "ghost hand" and makes a whooshing sound effect whenever he brings it up.

Owen and Ohio get Orson to drive the Ice Cream Surveillance Truck to the bakery so they can listen in to Otis and Olympia's conversation with the baker. The baker tells Otis and Olympia that half of everything in her store was missing, however Ohio and Owen realize that only half of symmetrical things are missing when a plant is still fully there. Because Otis and Olympia don't realize this, they are quick to accuse Halvsie Harriet of causing the oddness. To stop them, Owen goes in to the bakery disguised as a ghost who is early (or late) for trick-or-treating, but when the baker informs him that she doesn't have any candy, he offers to take the plant instead, emphasizing that the whole thing is there. This gentle nudge turns Otis and Olympia's attention to Symmetric Al instead of Halvsie.

When Olympia and Otis arrive at the house, they are greeted by an elderly lady who mistakes them for scouts selling cookies, and when Owen and Ohio realize they have the wrong house they get in to an argument, causing Orson to start crying loudly as he is an infant. Because of the excessive noise, Otis and Olympia walk up to the Ice Cream Truck and realize that Ohio and Owen were following them the whole time. They enter the truck, and realize that Symmetric Al lives in the pink house on 3rd Street, not 8th Street, because they didn't know that 3 is symmetrical with a horizontal line of symmetry.

Upon arrival at the pink house on 3rd Street, they find Al preparing to cause some unspecified oddness, and he admits to doings things the agents hadn't even heard of, all of which they pretend to know about. They then celebrate the pizza party they will be having soon, however we zoom out of their celebration and it is revealed that Oscar and Oona were helping Owen and Ohio without them knowing, and then we zoom out of that conversation to see Doctor O and an unnamed medical assistant congratulating each other on helping Oscar and Oona, and then we zoom out of their celebration by seeing Ms. O congratulating one of her assistants on helping Dr. O and the medical assistant, and then it is revealed that Orson was helping them, and he is the true reason why Precinct 13579 is getting their pizza party. 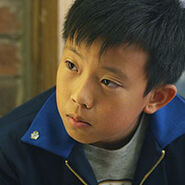