The Potato Ultimato is the A-plot of the 22nd episode of Odd Squad.

When Otto starts shrinking, Olaf leads Olive and Oren on a quest for the only known cure to make him grow again: the magical Growing Potato.

At headquarters, Otto is asking Olive to do his paperwork. Olive is happy because she got tall. Otto used to be taller than her but she grew. However, she realizes her suit still fits her. Olive thinks Otto shrunk. Otto is terrified that he is shrinking. They go to the lab and consult Oscar for their help. Oscar explains what a tape measure is loudly. Otto asks why Oscar is yelling. Oscar says that since Otto's ears are smaller, he would have a hard time hearing. Oscar measures Otto height and finds out that he is 4 feet tall. Otto says he used to be 5 feet tall. Given that Otto used to be 5 feet and is now 4 feet, this means he shrunk by 1 foot. Otto says he didn't do anything. He just arrived, did some work at his desk, and ate some potato salad. Olaf asks if anyone has seen his shrinking potato salad. Oren explains that Olaf clearly marked the bowl as shrinking potato salad. Otto is confused because every agent's name in the squad starts with O. Oscar begins to say that there was one agent whose name didn't begin with "O", but Olive stops him because there is no time. They ask why Otto ate Olaf's potato salad. Olive says that they can fix this. Oscar asks if he can fix this with his regrowinator. He says he can. He zaps it on Otto, but remembers that it only works on reindeer. Otto is now worried that he is going to keep shrinking until he turns into nothing. However, Oren says that there is a way to save Otto, with the growing potato. They must journey through the potato door. Olive tells Olaf to lead her to the potato. Olive tells Oren to come too so that she understands Olaf. Olive tells Otto to stay with Oscar, because he's still shrinking and it's very windy in there.

Olive, Oren, and Olaf go through the potato door and put on potato sacks. Olaf leads the other two to a closed cave. They find recorders, in which only one of them will open the wall and reveal the secret path. Olive asks what happens if the wrong recorder is chosen. Oren takes the wrong recorder and plays it and an explosion comes. Olive says that Oren should have just told her and she asks which is the correct recorder. Oren says Olaf doesn't remember. The only known fact is that it's the same length as the top part of the Upsidedownator, which he had when he was there previously. Olive calls Oscar and tells him to measure the top part of the Upsidedownator. Oscar gets four inches. They measure two recorders, one is 2 inches long and the other one is 5 inches long. However, they find a recorder that is 4 inches long. Oren plays the recorder correctly and the cave opens and the three enter.

They enter the least greatest fears cave, which are basically the things they want to happen. Olive sees Coach Roberts, who explains that he has 15 different games going on and all his players are hurt, and he trusts Olive to help him. Olive plays all the games for the players. Oren finds Ms. O sick, who says there's too much to do at Odd Squad, and asks someone to substitute for her. Oren substitutes for Ms. O. A dentist shows up and explains that she has patients with plaque, cavities and tartar build-up and trusts Olaf to do the job. Olaf becomes a dentist and helps the patients. They are finally done. Just then, Oscar calls and tells everyone to hurry up because as he makes suits for Otto, he keeps shrinking out of them. Oscar has made a mini-Odd Squad for mini-Otto and keeps him company while Olive, Oren, and Olaf get the potato.

In the meantime, Olive, Oren, and Olaf have found the potato. But it's way up on the wall. The way to get it is to use the 25-feet tall ladder. However, Olaf finds out that the ladder's on vacation in Florida. Oren tells Olive that she may need to find a new partner. Olive says that there has to be another way to reach the potato. They take off the rope from their sacks and measure them. Each rope is 10 feet long. However, they get the idea to tie all three ropes together, which will result in 30 feet. That is even longer and better. In the meantime, Oscar is asking mini-Otto how he likes the mini-Odd Squad headquarters. He finds all of his mini stuff. Back in the potato room, Olive is climbing to grab the growing potato and successfully grabs it. They leave the potato room and show up back at headquarters. They inform Oscar that they have the growing potato. Oscar gives Otto his old suit and tells him to put it on before he starts eating. Otto eats the potato and grows back. Olive welcomes her partner back and finds out that he is big. Otto says he knows in a deep voice. Olive realizes he is too big. Oren asks how much of the potato did he eat. Otto says he ate four or five bites. Oren tells Otto that Olaf clearly said to eat only one teeny bite. Oren tells Otto that he's going to keep growing unless he eats a shrinking potato and they have to go back to the potato door. Oscar tells Otto that he built a model headquarters that is bigger than the current headquarters. 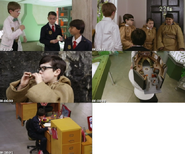