The Shadow is a mysterious villain who wants revenge on Opal.

The Shadow is the founder of the newly-formed worldwide Villain Network, as seen in "Villain Networking". Her overall goal is to gather all known villains together in order to take down the Mobile Unit, believing that teamwork among villains is helpful in defeating the agents. She herself personally hates the Mobile Unit, preferably Agent Opal.

"Follow the Leader" reveals that "The Shadow" is a false villainous identity made up by Olizabeth, Opal's younger sister.

In "End of the Road", Olizabeth reveals that the reason she turned to villainy was due to the fact that Opal was too overprotective of her. Her initial desire was to be as skilled at things as her sister, but since Opal never gave her a chance to prove herself, she decided to become a villain known as "The Shadow", taking down her sister and the rest of the Mobile Unit. Once Opal manages to convince her that she has potential to do great things and can become as skilled as her, the two siblings make up and eventually team up to fight the combined form of all the villains' powers, a destructive purple tornado. Opal then decides to stay with Olizabeth in order to help her reverse the damage she caused in Australia and in other countries, leaving the Mobile Unit in the process.

She is smart, mischievous and most of the time yelling at her evil henchman Brutus.

The Shadow has olive skin, brunette hair tied up in a low ponytail braid, and light brown eyes. She wears a black leather eyemask and a black-silver-and-red ninja costume. Sometimes she may be seen wearing a black hood that represents her theme outfit. 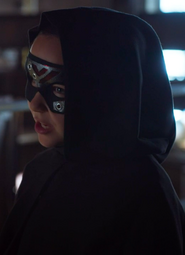