The Shapeshifter is a villain who can transform herself or anything else into whatever she wants! She stole Ms. O's briefcase in "The Briefcase" and was captured by Todd in "Training Day". She battled for Odd Squad documents in "Undercover Olive" and helped Todd try to frame Olive in "Disorder in the Court". She also knows Olive's greatest fear is pie. She also appeared in "Flawed Squad".

She has blue hair in a bob cut with a glowing body covered in silhouette pictures. In the flashback of "Odd Squad: the Movie", she's shown as a preteen or young teenager with short hair in an 80s perm.

Odd Todd declares the Shapeshifter as the winner in one of the matches called Rock-Paper-Scissors. 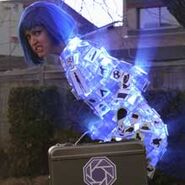