Odd Squad Wiki
Register
Don't have an account?
Sign In
Advertisement
in: Episodes, Season 2, A to Z,
and 2 more

Three's Company is the A plot of the 12th episode of Season 2 of Odd Squad.

Olympia and Otis are seeing a woman about an odd problem. She demonstrates by showing that when she pours orange juice into a box of cereal and dunks her shirt into it, the shirt comes out clean. It's not really a problem and more of an idea she gives to the agents; the only problem is that the solution only works on the one shirt she used to demonstrate. She's also soaking her feet in paint, thinking something will come out of it.

In Ms. O's office, Ms. O is congratulating Olympia and Otis for solving their latest case: putting the moon back into orbit, as shown in a photo of them performing the task; just then, her monitor shuts down. She calls the IT department about this. O'Beth checks the monitor's mainframe and finds that the energy cube powering it is completely fried, so she'll have to get a new one, which will take about 10 to 15 minutes. Ms. O wonders how she can get any work done while the repairs occur, and Olympia suggests that she work downstairs with them. Ms. O agrees.

However, Oona finds out that Ms. O will be temporarily downstairs and starts to panic. She tells Olympia and Otis that whenever Ms. O is downstairs, she tends to make some changes to the bullpen, which tend to hinder their work; Oona also tends to drop whatever she's holding. Olympia doesn't think it'll be that bad. Ms. O notices the paper that they're using and decides to make a change to it by making new paper that is dipped in dark purple ink for texture.

Olympia checks on O'Beth to see how the repairs are going and O'Beth tells her she just got the monitor working again, but also found that there's a blob infestation in the walls. Olympia suggests putting it back up so Ms. O wouldn't know the difference, and O'Beth sarcastically agrees while stating that she'll know who to blame if Ms. O asked her why the lights are flickering. The blobs are infesting the area where the energy rectangular prism is, and she doesn't have one, which would take a few months to order a new one. Olympia suggests they merge two cubes together to make a prism, and it works. However, O'Beth's gonna need more time to install it and get the blobs out.

Back downstairs, Ms. O has replaced all the chairs with bouncy balls and changed the color of the monitors to yellow. Owen can't monitor any oddness going on around town with the texture all yellow, and Ohlm starts to act even more incompetent than ever, getting to the point where he can't remember his own name. Ms. O then starts making the agents do aerobics.

Olympia goes back to O'Beth and she has good news and bad news. The good news is she installed the rectangular prism; the bad news is there's a vortex behind Ms. O's portrait. They need a new energy pyramid to close it, but she doesn't have any, and it will take 2 years for her to order a new one. The Oona and Otis can't take it anymore and Ohlm has forgotten how to walk. Suddenly, Oona drops an energy cube and splits into two pyramids, which they use to seal the vortex completely.

O'Beth tells Ms. O that her office is fixed. As Ms. O bids farewell to the agents, O'Beth notices tiny construction workers interfering downstairs and tells the agents they'll have to work somewhere else while she deals with it. Olympia suggests they work in Ms. O's office, much to their dismay. Ms. O agrees and Ohlm falls over from distress. 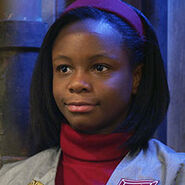