Totally Odd Squad is the B-plot of the 10th episode of Odd Squad.

In a flashback episode, Ms. O tells the story of how she defeated a villain called the "Patternista" back when she was an agent.

Ms. O joins Agents Olive, Otto, and Oscar in a rock-paper-scissors battle over the last jelly bean in the break room. When she beats the trio they ask her how she did it so easily. Ms. O explains that she memorized the agents' throwing patterns and that she learned all about patterns before she became Ms. O. At that time, she was known as Agent Oprah. A flashback to 1983 begins and she tells the story of the case that taught her about patterns.

The flashback opens on 1983's Odd Squad headquarters, which looks mostly the same aside from the technology. Ms. O introduces her partner (Agent O'Donahue) who is a cooly dressed boy with a flowery Hawaiian shirt on under his suit instead of the standard white shirt and red tie. The two interview a man who can't take off his multi-layered sweater. Oprah suggests using the "Sweater Take-Offinator" gadget, and is about to fire it when O'Donahue remarks that the guy's sweater "is a pretty choice". The comment causes the man to reconsider, and he decides to leave the sweater on. He thanks the pair and leaves.

Ms. O calls Oprah and O'Donahue into her office and directs O'Donahue to tuck in his shirt before pointing out that what he's wearing is not the uniform. He laughs it off and asks if she likes it when he brings her flowers. Ms. O rolls her eyes in response, and O'Donahue suggests that she considers getting a pet fish to calm her down. Ms. O replies that she doesn't have time for fish due to how much oddness she has to deal with. With that, she pulls the agents over to an overhead projector and briefs them on the case she has for them.

The projector shows that someone has stolen the medium-sized ball of gum from the town museum, but Ms. O states that the squad received a clue in the form of a VHS tape. She hands the tape to the agents, and upon watching it they learn that the criminal is a girl called "The Patternista". The Patternista informs them that they'll be able to locate the ball of gum if they can figure out the next sound to come out of her mouth. She proceeds to make a series of odd noises that repeat for a minute. Stumped, the two agents decide to go to the Math Room. With the origami fortune teller's help, they decipher the pattern and conclude that they need to go to a train yard.

Upon arriving at the train yard, the agents find the medium sized ball of gum and high-five in celebration. Oprah notices a tape stuck to the side of the ball, and pulls it off, wondering what's on it. O'Donahue brings out a VCRinator and they pop the video in. From the screen, the Patternista laughs and states that the entire plot to steal the giant ball of gum was simply a distraction so she could kidnap Ms. O while the agents weren't looking. Ms. O tells the agents that she isn't hurt, and instructs them to feed her fish while she's away, while paying extra close attention to how many times they feed the green fish. Having learned that Ms. O has been taken captive, O'Donahue grows disheartened and - believing that it's the end of Odd Squad - woefully bids Oprah farewell.

Oprah returns to the math room by herself and works to interpret Ms. O's video message, noting that the fish must be a clue to find her. She figures out that the green fish specifically must be code for "Green Street" and counts them to determine what the address is. As she exits the math room she thanks the origami fortune teller, and learns that her name is "Carol".

Once Oprah arrives at the warehouse, she busts in and demands that The Patternista tell her where Ms. O is. The Patternista says that Ms. O is "right here" and pulls off her disguise to reveal that she and Ms. O are one and the same. Oprah is confused and questions what's going on and Ms. O tells her that the whole case was a test to see if she was worthy enough to be her replacement once she retires. Honored that she passed, Oprah accepts the position of Ms. O and O'Donahue pops out from behind a pillar to congratulate her.

As the flashback ends, Oprah (now Ms. O) says that she learned two things that day - how patterns work, and that the last jelly bean always tastes the best. With that, she pops the jelly bean in her mouth, and smugly walks away, leaving Olive, Otto, and Oscar bummed.

At the very end of the episode, Agent Oprah teases that "Agent Oprah and O'Donahue will be back. Ooooohhh yeah!" 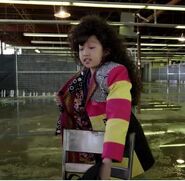