Trials and Tubulations is the 29th episode of Odd Squad. It is longer and is split up into 2 parts.

In this half-hour episode, the tube system breaks and Olive and Otto are left stranded in a dangerous forest, which is known as Sector 21.

This...is a picture with five Jackalopes in it.

Spatial sense: using a map to identify landmarks and navigate to a location.

Olive and Otto are on a case where a lady is trying to sketch Olive and Otto, but she is actually sketching stickmen. Yesterday, her drawing of the crossing guard was successful, but her sketch of Olive and Otto was not successful. As a result, Olive brings out her Unstickmaninator to fix the problem. She zaps it and the lady sketches Olive and Otto and this time it is successful. They leave and a man requests a drawing of him. She draws the man and there is another stickman and she calls for Odd Squad.

Olive and Otto are riding in the tubes back to the headquarters and enjoying the ride until the tube system breaks and they are stranded in the forest. Otto asks what happened. Olive says that they followed all the tube safety rules, including putting away electronic devices, not eating. Otto interrupts her and asks if it is true that they shouldn't eat because he thought it was one of those rules that didn't actually matter, such as running away with scissors, which is actually a rule that matters. Otto says he is actually learning stuff.

Olive calls Ms. O, who asks where they are. Olive says they are in a forest. Ms. O hangs up and says she will speak with Tube Lobby Operator O'Donnell, and thinks she has it under control. However, O'Donnell doesn't have it under control, because the panel is completely destroyed. She explains how it would work to fix the tube system. Ms. O decides to bring in O'Malley.

Later, Ms. O calls Olive again and informs her that it's going to take a little longer than she thought to get the tubes again. Olive says she is having fun where she is with Otto because she loves the forest and finds the sparkly rocks interesting. Ms. O concludes that Olive and Otto are in Sector 21, but she says that they don't need to worry. Ms. O sends them a map to get to the tube entrance and the best way to get there. Olive finds it and heads with Otto to the tubes. Otto says that they should look for a landmark and explains what it is. Olive shows Otto the polka-dotted mailbox because that's the only one in the forest. They also find a striped bench. Based on the map, they are between the mailbox and the bench and they have to walk towards the mailbox.

Back at headquarters, the tube operators have figured out the correct location of some of the parts that make the tube system function. Ms. O informs the tube operators that Olive and Otto are trapped in Sector 21, to which they are shocked. Ms. O then calls O'Callaghan to help the other tube operators.

Back in Sector 21, Olive and Otto are walking to the tubes where Otto, for some reason, slows down. Olive tells Otto to stop goofing around and she also slows down. They walk slowly, but not long before Logan the Ogre comes and grabs them out and he also asks them why they were using the slow motion path. Otto realizes that it was the slow motion path. Olive tells him that they were traveling through a tube which broke and they're heading to another tube entrance up ahead. Logan says that they shouldn't go that way because it takes 700 years just to get to that tube entrance. He shows them the guy that started when he was nine years of age. The agents show him a map, who gives them directions to the tube entrance, which is apparently the longer route. However, he warns them about the spider cats, because Sector 21 is very dangerous. They are shocked because Ms. O didn't warn them about any of this, because she didn't want them to panic. Logan also warns the agents about the dangerous things in the forest, including will happen at sundown which is when the forest comes to life. Otto asks why Logan is in the forest, if it's dangerous. Logan says his skin is poisonous and offers the agents a selfie and he warns them not to touch his phone because it's poisonous.

Back at headquarters, the tube operators are fixing the tube system by placing the items back into their correct positions. During the repairing of the tubes, they argue about who is the tube operator of the year until O'Duffey comes in and says he is tube operator of the year. Ms. O calls to check in on the agents. Otto and Olive are still walking through the forest to the tubes and indeed it is a very long route. Just then, Otto's phone rings and he picks up the phone and Ms. O asks him how he and Olive are enjoying the beautiful forest. Otto clarifies that he knows how the forest is like. Ms. O tells Otto that she was trying to tell them but she was busy and asks how close they are to the tube entrance. Otto tells Ms. O that they had to change routes but they're getting there. He also says that they found some beautiful yellow flowers. Ms. O, hearing what Otto said, tells them that they really need to leave the forest now. Otto asks why but his question is already answered when he and Olive see a laser chicken that is trying to shoot at them.

Otto and Olive run away screaming. Otto complains that they'll never make it to the tubes, but Olive has an idea. Ms. O tells the agents that laser chickens have terrible eyesight so they should cover themselves in mud. Otto loves the idea and covers himself in mud. Olive does the same thing too. The laser chicken doesn't know where Olive and Otto are and it leaves. The mud camouflage worked. Olive and Otto leave as the coast is clear.

Back at Sector 21, Olive and Otto are still heading to the tube entrance where they are passing the rock statue and they give money to it before passing it. The agents find their next landmark which is a bridge and a desk before the bridge. They find a man who stops them from passing him. The man tells the agents to answer his question in order to pass. Otto decides to answer his question. The man asks the agents what dance he is thinking of. Otto and Olive guess square dance and Shim Sham Shimmy. The man tells them they need to show him the dance to guess it correctly. Olive demonstrates the tango dance with Otto. The man says "no". The agents try the rock and roll dance, but it's still not correct. They then demonstrate the dance party music, the Macarena, breakbeat dance, and then a Russian dance, but still none of them are the right dance. Olive says they've done every dance they could think of. However, the man says they've missed one and gives them a clue. It rhymes with the chicken dance. Otto asks if it is the chicken dance. The man gets mad because he always makes that mistake. The agents demonstrate the chicken dance. The man stops them and admits that they got it right. He lets the agents go through the bridge.

Olive and Otto have crossed the bridge and they reach the tube entrance and stand on them. They say "Preparing to squishinate. Squishinating!", but nothing happens. They say the same thing again, but still nothing happens. The agents realize that the tube operators are still fixing the tubes. Otto clarifies that they could still see the sunset while the tube operators are getting the tubes fixed. Olive then remembers that Logan the Ogre said that something dangerous happens at sundown. The forest is now coming to life.

Back at headquarters, the tube operators have fixed the tube panel but it's missing a banana. Ms. O is eating a banana, but realizes that she ate the thing that makes the tube system function, but remembers that there is a banana room to get more bananas.

Back in Sector 21, the vines are growing and Olive and Otto split the large scissors in half and they run and cut down the vines using the split scissors.

Ms. O is trying to get the bananas from the Banana Room but she is unable to. However, a tube operator has one and Ms. O and the tube operators play hot potato with the banana until O'Donnell catches it and puts it in the tube panel to power the tube system.

Back in Sector 21, Olive and Otto destroy the vines and go back to the tube entrance and Olive tells Otto that I wouldn't trade one day for anything and just then the tubes start working and Olive and Otto are now in the tubes, finally going back to headquarters. The agents then return where Ms. O welcomes them back and she and the tube operators applaud for the agents' return back. Ms. O explains that things work when they work together and the tube operators laugh and they stop and they laugh again and then they stop. 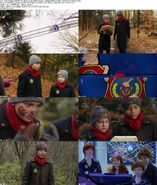